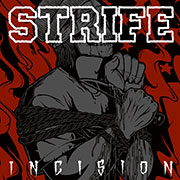 1. Still Searching 2. Incision 3. Revelations 4. Police Story
2015 self-released
Our score 6
by Luke Henderson
10/1/2015
It is fairly common knowledge that while Strife's back catalog has both hits and misses. When they are at the top of their game, they are almost unparalleled in their intensity and delivery. While many naysayers questioned whether they still had what it took following their decade-long hiatus, the band's 2012 album, Witness a Rebirth, demonstrated that the fury and passion that was ever-present on releases like In This Defiance was still alive and well. Following this rather triumphant return to form, it remained to be seen what was next for Strife, and although it took 3 years, we now have the answer. Incision, albeit brief, is very much a cross-sectional representation of Strife's tumultuous history. The three original and one cover songs on this release include elements of their most lauded period as well as some of their earlier and less appreciated work. It blends elements of trudging hardcore, metalcore, and stripped down punk in a somewhat novel way, although the intended impact isn't always felt. To start things off, "Still Searching" is a slowly building piece that combines varied tempos and influences, but never seems to decide exactly what direction it wants to go in. That being said, before ending abruptly, the track shows potential, whetting the listener's appetite for what might be yet to come. Fortunately, following this opener, the title track does deliver as the stand-out track on the record. Fully embracing the Cleveland hardcore style, guest vocalist Human Furnace (Ringworm) and guitarist Aaron Melnick (ex Integrity) help craft a dark, lumbering song stands up to anything in Strife's catalog. The nihilistic lyrics, muted riffs, and hulking drum beats blend expertly without seeming disjointed or compartmentalized, like so many tracks with guest artists can. The second half of this EP starts with "Revelations," which uses galloping drums, simplified punk riffs, and chugging interludes to differentiate itself from the record's early offerings. While it isn't a particularly memorable song, even on such a short release, it's not deficient in any noticeable way either. Not the most inventive band in the world, Strife was always able to show that hardcore doesn't have to be adventurous to be memorable or impressive, but on this track they fall short. Luckily, they somewhat make up for "Revelations" with their cover of Black Flag's "Police Story." This oft-covered song is put into a modern context by incorporating a series of sound clips from the countless police brutality cases currently saturating the American media, but the song itself is a fairly straightforward adaptation. The original intensity and urgency is still intact, but Strife is still able to make the song their own. Bottom Line: This EP is a nice addition to Strife's catalog, but it isn't particularly inventive or memorable. With the exception of the title track, this release isn't going to be required listening for anyone except for diehard fans.

When your very first sentence is f*cked up...

I give it a 5 just on the artwork and package. It was just cookie cutter strife hardcore. I listen to it just once, and that was it. Not bad, just same o same o. I think they did the limited tape and screen print. to make the release sound better.

people aren't going to care, people only romanticize the early 90s era of this band

Hire an editor. Your first sentence is broken.