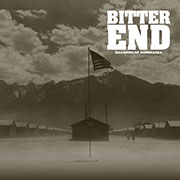 01. Power and Control 02. Truth, Lies, Fear 03. Realm of Despair 04. Long Time Gone 05. The Crushing Madness 06. Conversations with Death 07. Sting of Betrayal 08. Pleasure and Pain 09. Into the Unknown 10. No Man’s Land
2015 Deathwish Inc.
Our score 7
by Luke Henderson
8/30/2015
From the opening notes of "Power and Control" it is clear that Bitter End is determined to retain their place amongst hardcore's heaviest hitters. Building on a reputation earned through their earlier albums Climate of Fear and Guilty as Charged, the group returns after five years without a proper release to prove that they haven't lost a step, and, if anything, have picked up a few new tricks along the way. After the opener's blend of chugging riffs, galloping rhythms, and dynamic shifts, "Truth, Lies, Fear" continues the mid-tempo assault, adding metallic elements that haven't been as overtly present in the band's past work. The song's solos and layered guitar work eventually give way to a well-crafted, breakdown-driven latter half, but neither element seem out of place or forced. It may not be revolutionarily inventive music, but if nothing else it's well planned and executed. In fact, there's a maturity in the song-writing that shows significant growth over the band's past work, particularly evident in tracks like "Realm of Despair" and "Long Time Gone." That isn't to say that there isn't a raw energy that underlies these songs, or the album as a whole, but rather that there appears to be a sense of restraint driven by a desire to only include the elements necessary to serve each song. To match this crushing, unrelenting music lyrical content that leaves no question about why this band is called Bitter End. Vocalist Daniel Rosen's anger and desperation is ever-present, but it becomes even more focused on "The Crushing Madness" and "Sting of Betrayal." Each track recounts tales of anguish and despair over top of thrashy riffs and driving beats. Once again, these aren't overly inventive tracks, but what they lack in originality they more than make up for in passion and impact. The relentlessness of this album continues with "Conversation with Death" and "Into the Unknown," two of the album's stand-out tracks. Both use metallic guitar work over a charging rhythm section to set the foundation for the anthemic choruses and dynamic interludes that run throughout. As the album draws to a close with "No Man's Land," there is a sense of monotony that is caused by the ceaseless barrage of the proceeding nine tracks, but following the 'if it ain't broke, don't fix it' adage, the album closes with a sludgier version of what has proceeded it: blunt, crushing crossover songs about human misery supported by well-executed riffs and well-planned song-writing choices. Bottom Line: Bitter End isn't exactly travelling down an unworn path, but Illusions of Dominance is largely a skillful refinement of the band's previous output. This album will be a welcome surprise to anyone looking for straightforward, crushing, metallic hardcore.

I think it's a very good album. They still play with energy and they sound good live as well on album.

I have fun with my uncle

I just want to say,It's amazing I like it.

This album is garbage compared to Guilty as Charged. I don't know what they were thinking when they were writing it. Maybe something along the lines of.. "well.. we aren't going to be able to write an album as good as out last one.. so..... why even try?"