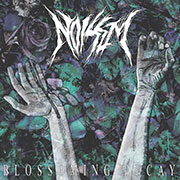 1. Trail Of Perturbation 2. Burning 3. 1132 4. Replant And Repress 5. Hostile End - Hollow Life 6. Cascade Of Scars 7. Another Night Sleeping In The Cold 8. Graining Enamel 9. Blossoming Of The Web
2015 A389 Records
Our score 8
by Daniel Marsicano
6/19/2015
Noisem's first album Agony Defined was a perpetual fireball of anger bundled into 25 minutes. Its rage was infinite; its scope singular with an intoxicating death/thrash approach. What a listener got with the opener from that album, "Voices In The Morgue" -- words drenched in gory ambitions, the blurring tempos, a reckless drive that threatened to topple the song over every passing second -- was the standard for the other eight tracks. The album's shortness was not a hindrance, as any additional length would have diluted the glorious charge that surged through the whole album. Critics lauded it, major publications covered it, their fan base grew, and tours with Carcass and Obituary were seals of approval from metal legends. All of that gave Blossoming Decay buzz that seemed far more substantial than the hype during Agony Defined's initial release. A389 Recordings releasing this record a month ahead of time on their Bandcamp page was something that wouldn't have happened ten years ago, but perhaps the prevalence of digital content and the "I want it now" attitude of the mainstream music culture made it a wise maneuver. It was also a way to counter early leaking of the album by dubious members of the music community. Those who get Blossoming Decay may be surprised by the slight detour Noisem takes. The striking cruelty of their delivery is still essential; to be honest, it's even more feral on this go-around. What has been enhanced is their ability to invoke a subdued mentality. There wasn't much low-key about Agony Defined, but for stretches on this album, the band lets a well-placed cello and unsettling feedback take hold. This is the driving influence behind the "Hostile End - Hollow Life" and "Cascade of Scars" pairing that make up the middle of the album. The former starts out in typical contemptuous manner, but takes a sharp twist halfway through with an ambient rustling that leads right into the latter track with a minute of cello and bass fed through layers of delay. For a band that thinks of three minutes as an epic tune, spending a full minute in a dreamy environment is an unusual step that pays off. Eventually, "Cascade of Scars" transitions back to its caustic roots, but that dynamic departure returns for a coda of sorts on closer "Blossoming of the Web." The first few minutes don't seem to be leading towards it, with the wicked, main thrash riff providing an extra helping of passion to their reckless style. Then the instruments fade out, making the parting goodbye a sorrowful one. Along with the more reflective lyrical content and its personal lean, Noisem has matured just enough to make Blossoming Decay stand apart from their previous releases. However, there are metal heads, punks, crusties or whoever is listening, that don't want maturity in their music. They just want to bang their head, throw their arms in the air, and wear themselves out in the mosh pit. Noisem hasn't ignored that demographic, with venom-laced cuts like "Burning" and "1132." Those two, which are placed side-by-side, are chaotic enough to power the rest of the album, but the band does it again later on with "Another Night Sleeping in the Cold" and "Graining Enamel." There may be a portion of their audience who scoff at Noisem stepping away from the blood-draining beat down of their debut for a brief spell, but the band comes off stronger for doing so. Their thrash and death metal combo has evolved into one that throws grind, crust, and hardcore into the formula, while showing an openness for sonic expansion. The core of Noisem -- the carefree, youthful aggression -- is still in play, but so is sharper songs written by musicians with a few more years on the road and a chemistry that has gotten more potent. Bottom Line: Noisem's diversions from their usual punishing style shows depth, but this album is just as furious as their debut.

Saw them open for Carcass and Obituary last fall. Wasn't impressed. Their name was very apropos to me - just a lot of noise.