Stick To Your Guns Disobedient 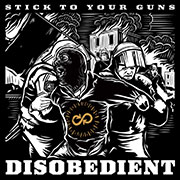 01. It Starts With Me 02. What Choice Did You Give Us? 03. Nobody 04. RMA (Revolutionary Mental Attitude) 05. Nothing You Can Do to Me 06. To Whom It May Concern 07. The Crown 08. I Choose No One 09. Disobedient 10. The War Inside 11. Left You Behind
2015 Sumerian Records
Our score 6
by Luke Henderson
4/24/2015
There was once a time when every hardcore band within earshot could be heard shouting political slogans and chanting calls for revolution. While the political nature of hardcore and punk are still alive and well in many pockets, fewer bands choose to wear their beliefs on their sleeves in the way that Stick To Your Guns does in 2015. In an age where slacktivism and jaded world views reign supreme, Disobedient relies on gang vocals, Gandhi quotes, and samples from The Great Dictator to craft something that is nothing short of an anthem of resistance. While this ambitious metalcore opus is far from flawless, it at least seems to have loftier ambitions that many of its compatriots. From the first notes of "It Starts with Me", this record proves itself to be the logical successor to 2012's Diamond. Swelling riffs, layered clean vocals, and calls to action allows this promising, but ultimately anti-climactic, opener to set the stage for the blistering "What Choice Did You Give Us?". This second track sees the immediate return of the band's favoured style of pounding riffs, overlaid with a mix of melodic signing and barked screams. It's not exactly the most inventive stylistic choice for a metal/hardcore band to make, but that doesn't mean that Stick To Your Guns doesn't pull it off with a surprising amount of maturity and song-writing prowess. Following these opening salvos, the bass-driven "Nobody" provides more of the same, as it doesn't deviate much in style or substance from the album's first two tracks, with the exception of a notably hard hitting breakdown. "RMA (Revolutionary Mental Attitude)" is an update/callback to the Bad Brain's PMA, with vocalist Jesse Barnett being joined by H2O's Toby Morse, in this brief but memorable blend of driving riffs and punk attitude. Next, "Nothing You Can Do" proves to be an immediately memorable song, in large part because of the guest vocals by Rotting Out's Walter Delgado. It is otherwise a fairly standard metalcore track, but as with other spots in this record, Stick To Your Guns seems to know how to recruit some of the best vocalists in hardcore, and put them to work in just the right places on this album. After a fairly impressive start to the record, Disobedient seems to lose focus towards the latter half of the album. "To Whom It May Concern" drags on, trying to be too many things at once, while "The Crown" fails to inspire much response at all. The closer "Left You Behind" is ambitious, but ultimately falls flat and comes off as misplaced and somewhat poorly executed. The exceptions to this back end slump are "I Choose No One" and "The War Inside." On the first of these tracks the band continues to show their ability to pick the perfect guest vocalist, as Terror's Scott Vogel serves up his unmistakable screams over top of the best written song on the record. Following this, "The War Inside" hits hard with galloping beats, devastating guitar work, and a message that comes off as both sincere and powerful. Bottom Line: Stick To Your Guns has the capability to be one of the best bands in hardcore. Unfortunately, Disobedient's inconsistencies and shortcomings tend to overshadow the more focused and intense moments of the record.

Excuse me while I disregard your opinion considering they use Jiddu Krisnamurti quotes. Do your research, dipshit.

Who cares, they suck

Rage Against the machine is stoked

Should have said "Awful label puts out awful album of awful band".

Hopefully the band reads that they suck. Go back to working at target ya momos