The Agonist Eye of Providence 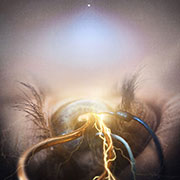 01. Gates Of Horn And Ivory 02. My Witness, Your Victim 03. Danse Macabre 04. I Endeavor 05. Faceless Messenger 06. Perpetual Notion 07. A Necessary Evil 08. Architects Hallucinate 09. Disconnect Me 10. The Perfect Embodiment 11. A Gentle Disease 12. Follow The Crossed Line 13. As Above, So Below
2015 Century Media Records
Our score 7
by Daniel Marsicano
4/5/2015
The Agonist gained some traction with their sophomore album Lullabies for the Dormant Mind, which went further a few years later with Prisoners. Their melodic death metal didn't smash barriers, but was connectable thanks to a tuneful sound and the shape-shifting vocals of Alissa White-Gluz. When she departed in 2014 for a prestigious spot in Arch Enemy, that left The Agonist without a lead singer for the first time in their decade together. Almost immediately, they announced her replacement, Greek singer Vicky Psarakis, a relative unknown save for a few guest spots on various albums and a position in the underground prog band E.V.E. Eye of Providence is her first real worldwide exposure for a majority of listeners. Bringing a fresh-faced singer into a long-standing group raises questions from the fan base about how much the music will be affected or if the singer will be a suitable replacement. In the case of a female singer, not only are they judged based on their vocal range, but their physical features somehow make their way into any discussion. It's not enough for them to sing their lungs out; they have to look stunning doing it too. This culture of appearance over talent is nothing new, but is a moot point; appearance has no weight over quality. If she can sing, she can sing, and that's all that matters. Fortunately, Psarakis can sing with a powerful edge behind every note, but her harsh growls are impressive. Not as sharp as her predecessor, but they are suitable enough. Where she really shines is with the melodic parts, where her range gets a work out. The notes she hits at one point during "Perpetual Notion" are spectacular, and the songwriting gives that side of her voice a place to cut loose. The amount of singing over screaming leans towards the former compared to the last few records, especially in the last third of the album. Since she does it so well, it's not a detriment. However, her inclusion is not a signal of a changing of directions for The Agonist from a musical standpoint. Save for the low-key acoustic ballad "A Gentle Disease," the album charges ahead with its take on the catchy side of death metal. "Gates of Horn and Ivory" is a suitably energetic opener, while "Disconnect Me" sparks a charge late into the album that is much needed. The guitar work gets a boost, with the leads being much more involved and multifaceted when compared to Prisoners. Most of the songs zoom by in a formulaic design, Psarakis belting out the lyrics with great resolve while the band hammer and fry brains with sharp intensity. Along the way exist a few infectious choruses, subdued passages that provide solace, and a brooding opus of a closer in "As Above, So Below." It's not quite as sublime as "Ideomotor" was on the last album, but its grandiose nature shifts the pace in a progressive manner that teases something potentially bigger in the future. Obviously, people will want to know who is a better singer, a question that plagues any band who replaces their frontman or frontwoman. If a comparison has to be made, Psarakis has the better singing voice, but passable harsh ones; Gluz is the exact opposite. You would think bringing in someone that can inject melody would be reflected in the songwriting, but that's not how The Agonist plays it here (the same discussion could be had about Gluz's role in Arch Enemy). Eye of Providence could have been many things after Alissa White-Gluz left, but it's what most would imagine them doing after Prisoners. The energy their music builds up is unmatched, and most of the songs are right around the comfortable four-minute mark that allows for structured compositions that don't fall into repetition. It doesn't quite match the highs reached by Prisoners, but Psarakis fits in about as well as Gluz did. Bottom Line: New singer, yet same uptempo melodic death metal from The Agonist on their new effort.

your all chumps... It's awesome