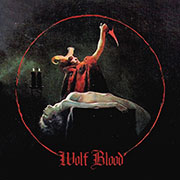 1. Witch 2. Ochro Ologo 3. Dancing On Your Grave 4. Black Moon 5. Exile 6. Procession Of The Witch
2014 Burning World Records
Our score 8
by Colin
2/13/2015
Wolf Blood is a four-piece band from Duluth, MN, and they play an interesting brand of heavy Stoner Rock. The album kicks off with a mid-paced stoner groove. The Black Sabbath reference here is an obvious one. Their vocalist originally comes off like a matured Ozzy (think closer to "No More Tears") and the track is structured in the loud-quiet dynamic of Paranoid's B-Side. But make no mistake; Wolf Blood isn't just another Sabbath worship act. By the end of "Witch" we've seen the band kick things into high gear. The pace picks up, the vocals move into a more screamed delivery, and the riffs bigger and louder than before. It's clear Wolf Blood are drawing from a wide variety of influences here. They showcase that to the furthest degree on the following track, the instrumental "Ochro Ologo," which takes a turn into the thrashier, sludgier side of their sound. One can't help but think of a tamer version of early High On Fire here, a characteristic which resurfaces later in "Exile." "Ochro Ologo" is assembled a little messily; not all the tempo changes are completely fluid, but I could see this song winning over a crowd at the start of a live set. "Exile," on the other hand, may be the most tightly arranged and, perhaps not so coincidentally, shortest track on the record. Wolf Blood shift back and forth between stoner rock riffs and heavier, up tempo moments seamlessly. The middle of the album consists of "Dancing On Your Grave" and "Black Moon." Both tracks take a similar approach, beginning with a slower tempo and find themselves gaining in volume and speed. "Dancing On Your Grave," with its Sleep inspired intro and soaring 70s rock riff, is probably the best overall song presented here. The production on Wolf Blood is pretty raw, which adds to the overall feel of gloom that the band is peddling. There are a few moments where the guitars get lost underneath the distorted wash of crash cymbals, but that is a minor complaint. The only time anything on Wolf Blood sounds a little contrived is in closing track "Procession Of The Witch." The lengthiest track on the record, it takes a little too long to reach its climax, plodding along through the same descending 4 notes for a majority of its duration. But when it does finally reach its peak, you are rewarded. The final four minutes of the record are some of its best material. Bottom Line: This is good. Wolf Blood aren't sluggish enough to be Doom, they aren't groovy enough to be Stoner Rock, and they aren't gritty enough to be Sludge. They are just their own thing and in the completely oversaturated world of metal music, that is pretty nice to hear.

I just watched my cousins have sex

LOL at these comments