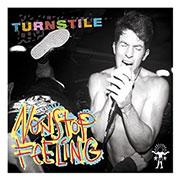 01. Gravity 02. Drop 03. Fazed Out 04. Can’t Deny It 05. Bleach Temple 06. Bad Wave 07. Blue By You 08. Out Of Rage 09. Bring It Back 10. Addicted 11. Love Lasso 12. Stress
2015 Reaper Records
Our score 8
by Luke Henderson
2/10/2015
The one thing that is most readily apparent to when listening to Turnstile's debut full length, Nonstop Feeling is that this is a band that is truly open and enthusiastic about experimenting with different musical styles and exploring far-ranging influences. While this isn't always the best career move for a hardcore band trying to make its way in a genre that is not always known for its acceptance of new sounds, it can make for intriguing and often refreshing music. Although there is little doubt that this is, at its core, an East Coast hardcore band with heavy NYHC influences, there is an assuredness and desire to push boundaries that was evident on their earlier work like Step 2 Rhythm, but that is only now fully coming to fruition. With rap rock and grunge influences abound, Nonstop Feeling attempts to take modern hardcore into relatively unfamiliar territory. Fortunately, Turnstile is able to do so by creating a record that relies on solid song writing, well-crafted riffs, and a genre-bending collection of songs that are at their best, exciting and energizing, and at their worst, clumsy but interesting. The record begins with the trio of "Gravity," "Drop," and "Fazed Out," all of which waste no time laying into thick grooves and a staccato vocal delivery used to punctuate and accentuate the crunchy riffs that form the songs' foundations. These tracks almost act as statement pieces, declaring that regardless of the stylistic shifts that occur throughout the rest of the record, Turnstile is, at its core, a hard-hitting, riff-centered hardcore band. After the barrage that starts off the album, "Can't Deny It" starts to add vocal elements reminiscent of Antony Kiedis and riffs that would not be out of place on a Rage Against the Machine record. Even though this track is undoubtedly alt/rap rock-influenced, it is still well-written and passionately delivered, so it does not come off as misplaced or poorly executed. After the brief interlude of "Bleach Temple," "Bad Wave" provides another brief foray into straight-forward, groove-laden hardcore before the melodic and vulnerable "Blue By You" adds a welcome change of pace. The latter half of the record is led by "Out of Rage," which memorably oscillates between bass-driven melodies and a ruckus, shouted chorus. Following this, the album shows its first signs of fatigue, with "Love Lasso" and "Addicted" failing to inspire or intrigue. The former is a second interlude, which drags and seems aimless, while the latter is simply repetitive and out of place on this otherwise innovative and progressive record. The closer, "Stress," seems like the appropriate way to finish the record, as it helps end on a high note by blending nearly every genre present on this album into a powerful mix of aggression and desperation. Bottom Line: Turnstile is able to break down barriers and explore new musical frontiers without coming across as cliché or directionless. Nonstop Feeling succeeds because it ties together a diverse set of influences with an unrelenting hardcore groove.

I think you blew your April Fool's Day post one this one.

This album is cool for one spin, but oh my god is it cheesy after that

Typical of Lambgoat. I can't believe there is not one good comment on this. This album is great and definitely scratches the itch left by Snapcase. Very interesting that is really an East coast sounding at its core with so many different influences.

the music sounds nothing like snapcase, although the vox are a dead ringer for them

The fact that this got a reviewer score of 9, and the new Napalm Death got a 7 tells you everything you need to know about lambgoat album reviews

Cool, now all of the dumbass soft grunge kids in shitty local bands will start ripping off even more shit that no one cares about.

this band is a joke

heavily influenced by snapcase, rage against the machine, 311, and bad brains. How can you go wrong?

Singer sounds a bit like Daryl, but otherwise doesn't sound much like Snapcase. Solid release overall though.

if i didn't know better i would assume this was a joke band. shit is garbage poser core.

yeah man, 311 riffs are so f*ckin hardcore bro! this band f*cking sucks and so do you if you think this is a "great hardcore album". eat shit.

lol yea didn't this same site just take a shit all over the new cruel hand for "breaking down barriers?" now completely creaming their pants for turnstile

love reading all the butthurt comments from 16 year old hardcore kids , this album is great if you dont like it dont listen to it problem solved , you haters are obviously still stuck in your scene mentalitys

f*ckING SHIT SHIT SHIT SHITTY TERRIBLY SHIT HIPSTERCORE GET THIS SHIT OFF THE f*ckING PLANET ALONG WITH EXPIRE, BACKTRACK, ROTTING OUT AND TWITCHING TONGUES

All you guys crying about what is hardcore and what isn't ....I wouldn't even call this hardcore. This is some nostalgic rock to me. "This isn't real hardcore"..no shit who gives a f*ck you probably are the people that just crowd kill to the most terrible sounding shit bands on earth. Keep your f*cking hardcore please. If this is not hardcore then i'm glad because I dont want you tough bro-core f*ckboys here anyways lol keep your bullshit beatdown dude

This album is Rage Against The Machine, 311, sometimes even Chili Peppers, Bane and Hot Water Music., 90's rock as f*ck...it's energetic as shit. Keep your tough guy crew core bullshit to yourself cause nobody cares man.

Turnstile - Move Thru Me