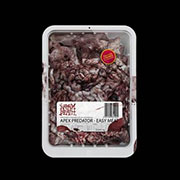 01. Apex Predator - Easy Meat 02. Smash A Single Digit 03. Metaphorically Screw You 04. How The Years Condemn 05. Stubborn Stains 06. Timeless Flogging 07. Dear Slum Landlord... 08. Cesspits 09. Bloodless Coup 10. Beyond The Pale 11. Stunt Your Growth 12. Hierarchies 13. One-Eyed 14. Adversarial / Copulating Snakes
2015 Century Media Records
Our score 7
by Daniel Marsicano
2/2/2015
There's something to be said for a band you can rely on. When a new album of theirs comes out, it's comforting to be guaranteed it'll smash your face up, like their previous album and the one before that and the one before that, and so on. It's even better when said band isn't content with a dozen tracks that sound tired or complacent, but throw subtle nuances into their songwriting to give the songs distinction. British grindcore pioneers Napalm Death have been doing just that the past decade, sneaking in bits of experimentation without taking anything away from their death metal and grind method. Apex Predator - Easy Meat does not back down from this approach, as expected. Though there isn't as wild of a moment on this album as a saxophone blaring in the background, e.g. "Everyday Pox" from 2012's Utilitarian, there is still an effort put in to broaden their sonic horizons. The title track, an unfortunate misstep from the band, is a churning extended introduction that could have been cut in half. Much better off is the creepy saunter of "Dear Slum Landlord," featuring slightly melodic vocals that are layered for added effect. Room is made on the anthemic "Hierarchies" for a brief, yet thrilling, guitar solo. That's something the band doesn't do often, so the use of one so late in the album is a benefit. Still, fans don't come to a Napalm Death album for solos or vast vocal ranges; they want punishing music with a message that can barely be understood over all the screaming and shrieking. If the title track doesn't do that for you, the following two tracks will most likely suffice. "Smash a Single Digit" is unfiltered mayhem, stuck in a time warp somewhere around 1988. "Metaphorically Screw You" is lathered in contempt and vile rhetoric, a fitting accompaniment to its lightyear tempos. "Cesspits," one of the first tracks released to the public, is an apt depiction of what the band does so well. It's long enough to get out of grind territory, but doesn't overstay its welcome. The riffs have pep to them, and the bass is right up front, audible and thumping against the kinetic drums. When this band hits their stride, it's hard to beat them. If the piercing shrieks that have become more commonplace in the band's music over the years are your thing, the back-and-forth vocal interplay on "Beyond the Pale" will be a glorious ride. Clocking in at around the 40-minute region, Apex Predator - Easy Meat is a sturdy listen that doesn't get bogged down in semantics. The only song to sneak past the four-minute mark is the grim closer "Adversarial / Copulating Snakes." At over five minutes, it's one of the longest songs the band has recorded in recent memory. That extra time is spend with dense riffs in the song's second half that aims less for a speedy hit-and-run and more for a calculated fist fight. At this juncture in Napalm Death's career, they could be on autopilot, like many other bands who have been going strong since the ‘80s. However, that mentality is far from their sights. Even when their experimentation doesn't work out, the fact they even try is worthy of praise. There are definitely a few tracks that could be vital for the band in their future live shows. Then they'll be other tracks that will fade off and disappear as deep cuts for the diehards to drool over. Whatever side they go on, the songs that make up Apex Predator - Easy Meat continue to keep Napalm Death relevant, whether it's a new fan or one who has stuck around since the Scum era. Bottom Line: Reliable as ever on their fifteenth studio album, Napalm Death continues to decimate bands half their age with their death/grind cacophony.

"Reliable as ever on their fifteenth studio album, Napalm Death continues to decimate bands half their age with their death/grind cacophony." Couldn't agree more. This band is as intense as ever with no sign of slowing down.

this shit rules. i like the weird clean vocals and the opening track is sweet too. ND guys have always had a ton of industrial projects and it shows

Totally agree. ND is a brutal machine that doesn't quit. Also a sweet plus that Barney quotes Swans in Dear Slum Landlord

ND are gods amongst men.