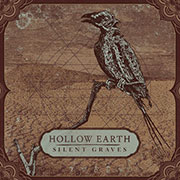 01. The Reclamation 02. Black Blood Of The Earth 03. In The Mouth Of Madness 04. Beneath The Weight Of The Cross 05. The Funeral Of All 06. Monochrome Surroundings 07. World To Come 08. Swallowing Knives 09. The Dissolution
2014 Panic Records
Our score 7
by Daniel Marsicano
12/5/2014
The toughest aspect of determining the appeal of Hollow Earth's first full-length album, Silent Graves, is pinpointing one track that best encompasses their sound. A scorcher like "Black Blood of the Earth" emphasizes their metallic hardcore background, though its directness stands in contrast to the echoing feedback and laborious pace of "In the Mouth of Madness." Both of those tracks are side-by-side on the album, an indication of a dual nature to the group that is not just limited to this instance. Each track seems to bellow up some level of nuance that may have not been evident on any other previous track. This formula is prime for tunes that range from compelling to borderline animalistic. The root of Hollow Earth is the kind of schizo, yet melodic, hardcore that groups like Converge and Shai Hulud became involved with. It's probably not a coincidence regarding the latter band, considering vocalist Steve Muczynski and guitarist Mike Moynihan were members for a few years. However, that is just the base material they use to mold their songs. A simplistic copy job would be too direct for these musicians. The band is unafraid to employ cleaner tones to the guitars, slower tempos, and even symphonic elements to drive their music. The last part of that list is easily the most offbeat aspect of Silent Graves. The prominent usage of an orchestral presence frames the instrumental "The Funeral Of All." It comes off the edgy mannerisms of "Beneath the Weight of the Cross," and comes on like a horrifying dirge towards a bleak unknown. Most bands would use this as a minute-long interlude to provide listeners a break, but Hollow Earth use "The Funeral Of All" as a significant departure that feels relevant to the album's progression. While there's nothing else close to the unpredictability of "The Funeral Of All," the high quality of the remaining songs compensates for that. The band have a knack for subtly building intensity, using smoother riffs to put on a false sense of serenity. "The Reclamation" does this adequately in the first few seconds, as does "Monochrome Surroundings" during its reserved first half. Like much of the material, any time spent in subdued affairs eventually breaks down into a striking dose of anger and hostility. Silent Graves skirts the line between rabid hardcore and moody doom, though never completely dives into either spectrum. The interplay between the two is one of the most worthy aspects of this record. Hollow Earth aren't just writing songs to mosh along to, but connect in darker dynamics that can be striking to hear. The last thing the world needs is another Converge knock off, and this group is far from that distinction. While picking one track to encapsulate Silent Graves may be a futile effort, it does illustrate just how much depth resides here. Bottom Line: A worthy metallic hardcore album with melodic depth.

These guys are the swaggiest pimps I've ever met. f*ck them forever.

I didn't know Kid Rock sang for a wannabe hardcore band. I bet these guys all c-m in his hair before each set.

pssy shit for nerds, this guitarist looks like the type of guy who would stick his dick into a burrito and then take a bite.

mike moynihan wrote all these comments himself- Dallas of NILE

They're basically a Run with the Hunted cover band

...and the town goes to sleep

so many good releases this year, and lambgoat hasn't reviewed close to a single one.

Well i met both of them at my own house. I was organized a small welcome party.. they are decent people with good heart people... for those who just blast saying them not knowing what u try to say.... just end it guys!