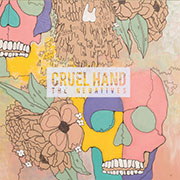 01. Pissing-Spitting 02. Battery Steele 03. Why Would I 04. The Negatives 05. Scars For The Well-Behaved 06. Heat 07. Unhinged-Unraveled 08. Monument Square People 09. Vigilant Citizen 10. Gasoline 11. Still 12. Cheap Life
2014 Hopeless Records
Our score 5
by Luke Henderson
11/12/2014
There is little doubt that Cruel Hand knew they were in for a potential backlash with the release of their latest release, The Negatives. Unlike earlier albums like Prying Eyes and Lock & Key, which blended traditional hardcore aggression with metal-inspired guitar work, this new record repeatedly relies on harmonies and clean vocals to a much greater degree than anything in the group's previous work. It isn't going out on much of a limb to say that the hardcore scene's inability to embrace musical change is somewhat notorious, especially when a group moves more towards a more melodic, rock-based sound rather than an increasingly heavy or metallic style. This revulsion of abrupt stylistic conversions is best captured in the modern era by the response to the release from another NYHC-inspired band, No Warning, and their 2004 album Suffer, Survive. When the widely respected and heavily influential group released a decidedly lighter album that was closer to Linkin Park than The Cro-Mags, there was an outpouring of hate and derision of the band. While time has been somewhat kinder to Suffer, Survive since its release a decade ago, there is no doubt that hardcore bands who decide to branch out and experiment still face a hard road ahead. The one issue that Cruel Hand needs to worry about more than a stylistic about-face on The Negatives isn't the backlash that may come with stepping out of the traditional hardcore box, it's with the quality of songs themselves. The album starts off well enough, with upbeat and catchy songs like "Pissing-Spitting" and "Battery Steele." The opening track showcases the best parts of the band's newfound sound, delivering aggressive, but refined guitar lines and a memorable chorus. Following this, "Battery Steele" is a fleeting throwback to the Lock & Key era, and its driving, metallic riffs. Despite starting off on the right foot, the album quickly loses its way. "Why Would I" and "The Negatives" seem rushed and forced, with the former never quite reaching the fever pitch it seems to be promising, and the latter's lackluster vocal performance and repetitive nature make it painstakingly obvious that it is the album's longest track. Next, "Scars For The Well-Behaved" does deliver musically, with a metallic edge and a hard-hitting breakdown, but the vocals seem out of place and uninspired which leaves the track sounding awkward and lopsided. "Heat", "Unhinged-Unraveled" and "Monument Square People" follow suit, coming across largely as bland and derivative rock songs that become less memorable with each listen. For those able to make it through the middle of the album, there are some worthwhile tracks towards the end. "Gasoline" and "Cheap Life" shows that Cruel Hand is able to blend hardcore and rock with considerable skill without becoming tedious when the songs are kept focused, with an emphasis on cohesive song writing and well-placed melodies. Unfortunately, these tracks aren't enough to save this album. Although Cruel Hand should be commended from expanding their musical horizons, The Negatives demonstrates that such reinventions aren't always successful. Bands like Fucked Up have demonstrated that by-the-numbers hardcore can be creatively limiting and that experimenting in new and unexpected musical styles can be rewarding and satisfying for both the creators and the audience, but Cruel Hand has missed the mark in this respect. It's as if they have become less sure of themselves and what sort of band they are striving to become. Bottom Line: Hopefully The Negatives is a simple misstep for this otherwise consistently impressive band. While it seems that the band tried to avoid becoming stale by introducing new musical elements and exploring new genres, this record has quickly become the most forgettable of the band's releases.

this band sucked even before they pulled a no warning

Their best album by far (Although I still think their best song is "Dead Weight").

This is actually probably their best work, I wasn't a fan of the No Warning witch-up either but it really grew on me.

I love how a lot of people hate on this album on youtube. I didn't like it the first time through and a couple weeks later fell in love with it randomly.

f*ck this shit listen to lock and key

this album is way too blackened/death/doom metal for me

Just heard this album and I entirely disagree. It definitely is a huge step away from CH's original style, but it's still pretty f*ckin sick.