At The Gates At War With Reality 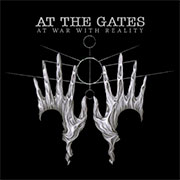 01. El Altar Del Dios Desconocido 02. Death And The Labyrinth 03. At War With Reality 04. The Circular Ruins 05. Heroes And Tombs 06. The Conspiracy Of The Blind 07. Order From Chaos 08. The Book Of Sand (The Abomination) 09. The Head Of The Hydra 10. City Of Mirrors 11. Eater Of Gods 12. Upon Pillars Of Dust 13. The Night Eternal
2014 Century Media Records
Our score 7
by Daniel Marsicano
11/3/2014
At the Gates disbanded in 1996 after arguably releasing one of the best albums to come from the Swedish melodic death metal scene, Slaughter of the Soul. That album, considered seminal for a whole sub-genre of metal, still holds up considerably well in 2014. Their comeback over the past decade was a series of "that won't happen" scenarios that somehow did. "Oh, they won't get back together." They did. "Oh, there's no way they'll play more than a few shows." They did. "Oh, they won't release a new album. The members said it themselves in multiple interviews." Enter At War With Reality, their first full-length in 19 years. The years between records is bound to gather up some hesitation from listeners, though Carcass proved last year with Surgical Steel that a band can avoid hiccups after a lengthy break. The core line up from the Slaughter of the Soul recording is involved too. Having all five members from that album here gives At War With Reality that necessary link to the past. This isn't a situation of one original member bringing some no-name session players on board. Plenty of bands have done so, and it's a good sign that the band skirted that and worked as a unit on these 13 songs. So after all the attention and effort the musicians put in since the mid 90s to other projects (e.g. The Haunted, Cradle of Filth, Paradise Lost), how does At War With Reality come across? Well, it's distinctly At The Gates; their melodic death metal transcends time and sounds like the natural next step after their fourth album. This could have came out in 1997 or 1998, if not for the beefed up production that plants the music in a modern era. Even so, the structuring of these songs is right in line with what was coming out of Sweden throughout the ‘90s. Any fears of something unwarranted from a creative perspective are dashed with the one-two smack down of "Death and the Labyrinth" and the title track. Those two come after a tame spoken word intro, jetting the album into a familiar pace. Vocalist Tomas Lindberg's ravenous screams have lost little of their luster from his early days, and the rest of the band haven't slowed with age. The tracks are a stirring mass of electric drive ready to bubble over at any moment. That drive is maintained throughout, even in the guitar-heavy instrumental "City of Mirrors." Though tempos do change, the band electing to start off "Heroes and Tombs" and "Order from Chaos" with a restrained approach, things get back to the usual grind at some point. A few songs, like "The Circular Ruins," do overstay their visit, going off past four minutes. That may not seem very long, but considering their best songs are usually around the three-minute mark, an extra minute here and there does make a difference. The only real ambitious step that pays off is closer "The Night Eternal," with its sinister atmosphere and unquenchable melodic desire. If there is a formula to the perfect melodic death metal song, At The Gates no doubt takes from it the same way hundreds of copycat bands did after their departure from the scene. That's really the main hitch in this album; the fact that they are pulling from a tired musical equation. While they do put some life into it, avoiding the flatline effect that has hurt other bands in the past, this is still a sound that hasn't seen much deviation over the years. Saying that this album is exactly as you would expect is a cop-out, but it's also the most apt way to communicate what At The Gates does with At War With Reality. At War With Reality could have been an unmitigated failure, but At The Gates are better than that. They know what their audience wants, and the album reflects every element of what put the band on top of the melodic death metal list. They maintain their relevancy in a crowded metal market, and fans should be thrilled at the results. It may not have the same impact as Surgical Steel, but At War With Reality takes a professional approach to death metal to put out an admirable, if unsurprising, successor to a renowned album in Slaughter of the Soul. Bottom Line: At The Gates fans will be satisfied by this album, even though the band doesn't deviate much from the melodic death metal formula they helped pioneer.

wow - another stellar review as posted by the shitholes at Lambgoat. STOP RATING EVERYTHING A 7!!!!!

it sounds like a darkest hour cover album... nuff said.

At first listen, I thought this album was pretty bland. However; I continued to give it a shot, somewhat begrudgingly, and came around to appreciate it immensely. The subtle details and choices this band makes put them far ahead of their peers and the decades worth of clone bands that they inspired. Couldn't ask for a much better return to form.

True story. Really good album. It's a grower. At first listen, I thought this album was pretty bland. However; I continued to give it a shot, somewhat begrudgingly, and came around to appreciate it immensely. The subtle details and choices this band makes put them far ahead of their peers and the decades worth of clone bands that they inspired. Couldn't ask for a much better return to form.

Took me a couple times through to appreciate it for what it is and many subtle details are easily overlooked. Great album.

clown shoes all around gays the violent buttrape train is here

Part of what made early At the Gates so appealing was their originality and chaotic song structures. Melodies were beautiful yet unrestrained, and song structures, while clearly premeditated, seemed to flow with an organic energy characteristic of an untamed beast that was aware of its start and end point but chose to be completely wild in the execution of its journey. On Slaughter of the Soul, the beast has been tamed, if not outright slain.

Solid f*cking banger of an album.

it sounds like a darkest hour cover album... nuff said. Please tell me you're trolling please

You mean Darkest Hour sounds like an At The Gates Cover band?

7 out of 7 maybe. Album rules. You can't knock a band for spawning copycats.