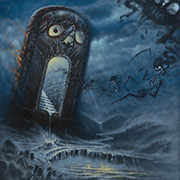 01. A Debt Owed to the Grave 02. Deathless 03. Labyrinth of Eyes 04. Madness Opus 05. Scorched Earth Policy 06. The Blackest Reaches 07. The Fix 08. United in Helotry 09. Apex 10. Witch Trials
2014 Metal Blade Records
Our score 8
by Daniel Marsicano
10/17/2014
Deathless is Revocation's third output in three years, following 2012's Teratogenesis EP and last year's self-titled album. The quick succession of releases can be an indicator that the current line up is harboring a limitless creative surge. However, from a different perspective, it can also lead a band to stretch themselves out further than they should to maintain the quality of their material. Revocation's eponymous release was a mixed bag, an array of dazzling guitar leads and meaty aggression alongside riffs that dragged and plodding songwriting. On their first record since signing with Metal Blade, Revocation reverses the tide and puts out a stellar fifth album. In reaching that result, the band have not abandoned what they've been doing the last few years. The songs still have plenty of moving parts, and a couple of six-minute tunes appear to show the band's more progressive attributes. There's a general lack of offbeat shenanigans, with no random acoustic/banjo breaks or brash horns to give the music odd flair. The longer songs, as usual, afford each member the chance to take the helm. The technical aspect of their sound has not diminished, and bassist Brett Bamberger, who debuted on Teratogenesis, gets a few parts all to himself. With "A Debt Owed to the Grave," Revocation ignites the album with an opener devoid of time-wasting. No excruciating buildup to the inevitable explosive style the band have patterned; just an energetic, upbeat tune with a fantastic harmonized guitar outro that is catchy as hell. They don't deviate from this tempo much of the album, save for a few cleaner guitar tones on the ambitious "Madness Opus." Deathless starts off on a monstrous note, and maintains that with a straightforward mentality. Though the band's instrumental abilities have always been on display, the amount of space they are given on Deathless is substantial. The last halves of "Scorched Earth Policy" and "Witch Trials" are without the typical shouted vocals, and it seems the band thrives in this environment, free of verse and choruse. There's a fun magnetism to their playing that makes it easy to get into. In keeping with tradition, "Apex" is a rousing instrumental track on par with "Across Forests and Fjords." From the relentless nature of "The Fix," which would have fit perfectly with the other songs on their 2011 Chaos of Forms effort, to the totally infectious chorus on the title track, Revocation fans should find something catered to their liking. The latter highlight is thanks in part to melodic vocals, which have slowly crept into the band's foundation the last few full-lengths. Like those other albums, they are the most unpredictable aspect. While they work great on the title track, their presence on "Labyrinth of Eyes" is awkward and ultimately bland on "United Helotry." My review of their last album, for this very site, had mentioned that much of the material should have gotten a "cautious play-through." That's not the situation with Deathless, which is much more in line with what the band had been doing their first two or three albums. It's an album that you play all the way through and want to go back to, not just because you're a fan of the band, but because the songs are sharply written and brimming with replay value. A move to a new label and only a year between releases have not stifled the remarkable leaps Revocation have taken since generating momentum back in 2009 with Existence is Futile. Bottom Line: Deathless is a rousing technical thrash/death album with replay value to boot.

Sick f*cking album. Should be titled riffs rather then deathless

unreal album, should be called drums instead of deathless