Cold World How the Gods Chill 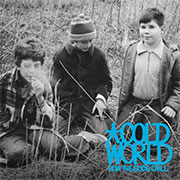 01. Intro 02. Blind 03. The Real Deal 04. Never Knows Best 05. Cracks Of Hate 06. No More Fun and Games 07. Tome Check-In 08. Never 09. Find Your Way 10. Omega 11. Youthful Expression 2014 12. Hell’s Direction 14. Max B. Outro
2014 Deathwish Inc.
Our score 7
by Luke Henderson
9/19/2014
To say that Wilkes-Barre, PA's Cold World is an ambitious band would be putting it mildly. Not only did they name their sophomore full-length How the Gods Chill, with its not-so-subtle implications, but they continue to strive to produce innovative and hard-hitting music that seamlessly blends elements of hardcore, rock, and hip-hop. While there is no shortage of bands that have tried to mix rap and rock in the past, very few have been able to do so in a compelling way. Cold World's aim seems to be to amalgamate hip-hop's attitude and flow with hardcore's force and brevity. Fortunately for listeners, not only is the band able to do this with increasing finesse, but they do so while avoiding most of the pitfalls of typical rap-rock or rap-metal endeavors. As on previous releases, How the Gods Chill starts with a typical hip-hop intro, interlacing haunting piano, scratching records, and a mournful voiceover. This melodic introduction quickly dissipates as the first notes of "Blind" demonstrate that this album is going to be as hard-hitting as anything the group has done in the past. The schizophrenic quality of this track juxtaposes slow, trudging riffs against increasingly frantic and up-tempo verses, which help make up one of the more high-energy songs of the entire record. Following this, "The Raw Deal" wastes no time continuing to build the momentum developed in the previous track, with memorable Biohazard-eque guitar lines, pounding drums, and venomously delivered lyrics detailing various betrayals and resentments. These early highlights are only matched by "Youthful Expression 2014," with its unrelenting riffs and pounding breakdowns, and "Omega," which features Blacklisted's vocalist George Hirsch and uses ferocious riffs and crunching staccato breaks to become the standout song of the record. Unfortunately, what seems like Cold World's best work to date through the first few tracks, takes its first misstep with "Never Knows Best." This mid-tempo foray into hard rock is not only a significant let-down in terms of lost momentum, but it also squanders several potentially hard hitting riffs, which consistently fail to leave any lasting impact, especially after repeated listens. Relying on more worn-out, Life of Agony-inspired riffs and bland rock choruses, "No More Fun and Games" and "Never" also fall short, with the latter recycling riffs from "Never Knows Best" and lasting twice as long as many of the album's stronger and shorter tracks. Although Cold World's more melodic endeavours leave much to be desired, their ability to merge elements of hip-hop into even the most aggressive songs is readily evident in "Cracks of Hate," where rapper Meyhem Lauren provides expertly delivered rhymes over progressively heavier guitar lines. Their next foray into genre mixing takes place on "Hell's Direction," which includes the legendary Kool G. Rap providing an introductory verse on an otherwise aggressive and fast-paced hardcore thrasher. These songs help rescue this album from its less-focused and underwhelming tracks, while proving that Cold World is one of the few groups that knows how to smoothly marry these seemingly diametrically opposed genres. Bottom Line: Cold World continues to prove that they can provide the best of both worlds. At their best when they are at their most intense, Cold World's project to unify hardcore and hip-hop is only interrupted when bland and formulaic rock clichés tarnish an otherwise impressive album.

this music is awful

Cold World is awesome. Far less hip hop on this or any of their records as this dumbass makes you believe. Straight driving hardcore that purely slays.

"Sophomore full length album".... it's their third full album. The opening statement of this review already gives you no credit.

it is a sophomore full length. the other shit is eps and collection of 7"s and singles

"Sophomore full length album".... it's their third full album. The opening statement of this review already gives you no credit. Check your history, jack ass. No Omega is a comp, not an LP of original material.

"Sophomore full length album".... it's their third full album. The opening statement of this review already gives you no credit. Check your history, jack ass. No Omega is a comp, not an LP of original material. - The "Ice Grillz" release consisted of the band's demo and an EP. "No Omega" was a collection that included this material and split songs. "Dedicated..." was their first full-length. This record is their sophomore LP. Gay guy.

black metal is not stoked

Is it just me or is the LOA thing getting kinda old?

If they stuck more with straight-forward hardcore with a few (few) hip-hop-influenced tracks thrown in, I'd be much more satisfied with this release. That being said, the more "hardcore" tracks are the best CW has ever done.

Hardcore songs are killer, the crossover tracks are a meh at best, but it's still got bangers. I don't feel this band will top the simplistic stompers that they made on Ice Grillz.