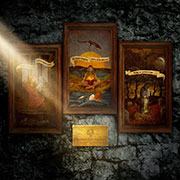 1. Eternal Rains Will Come 2. Cusp of Eternity 3. Moon Above, Sun Below 4. Elysian Woes 5. Goblin 6. River 7. Voice of Treason 8. Faith in Others
2014 Roadrunner Records
Our score 8
by Daniel Marsicano
9/13/2014
Though not without its moments, Heritage was, to this writer at least, an overinflated and downright boring album from Opeth. Even when looking past the "no harsh vocals" and "lack of death metal" cries that rang through the fan base when it was released, a good number of songs were lifeless and lacked direction. Conventional logic suggested that Opeth would chalk this up to improper timing, reverse the trend, and throw some heavier elements back into their sound. Instead, they have stayed the course with Pale Communion. This time, however, Opeth gets their take on progressive rock right. Though the growls and punishing riffs are still kept locked away, the genuine thrills their music can conjure up are on full display. These songs sway with purpose, not lost in hokey folk interludes or two-minute piano instrumentals. The rhythm work crackles with energy, riding on the immense talent of drummer Martin Axenrot, who has embraced this style of music with vigor, and longtime bassist Martin Mendez, a key element of their instrumentation since the late '90s. Mendez, in particular, is clearly heard throughout the whole album, a welcomed development compared to past albums where his contributions were swept under by the brash death metal. There are no reservations from Opeth about pushing the proggy excess, with glorious keyboard leads and guitar solos abundant throughout. Those who have already heard the single "Cusp of Eternity" know how vibrant the guitar playing is, but it is not held just to that tune alone. The instrumental "Goblin" is a fury of off-tempo riffs, while the harmonized guitars on "River" give the song a spark that its mellow beginning fails to deliver. There's even orchestration brought in to imbue closer "Faith in Others" with some gravitas. With all of these components thrown in, Opeth is still the product of five musicians. Though vocalist/guitarist Mikael Akerfeldt is the mainstay, the one who has been the visionary of the band since their beginnings some twenty-odd years ago, the other musicians are not hired guns. No more is this obvious than with new keyboardist Joakim Svalberg, who contributed to Heritage on that album's title track. Svalberg goes all Jon Lord in the intro to "Eternal Rains Will Come," provides a solid background atmosphere to the acoustic-prevalent "Elysian Woes," and goes balls out with the rest of the band on the opus "Moon Above, Sun Below." The aforementioned "Moon Above, Sun Below," the third song on the album, is the longest composition the band has birthed since "Hessian Peel" from Watershed. Exceeding ten minutes, but feeling nowhere close to that, the band truly goes into progressive mode like the stepchild of Genesis, Jethro Tull, and Emerson, Lake, and Palmer. It's an exciting format, and the pleasant acoustic break halfway through is a fitting respite before the wave of illuminating keys and catchy melodies returns to close things out on a high note. Pale Communion is not metal, but it doesn't pretend to be. This is what Opeth wants to do, and the days of My Arms, Your Hearse and Blackwater Park are almost surely over. Making such a drastic sonic shift so late in one's career can be a major stumbling block if conducted poorly, and it seemed that could have happened once Heritage came out. Fortunately, Opeth's eleventh album turns out to be just what they needed in order to get their newfound progressive rock sound over the hump. Pale Communion won't silence those wanting the band to include "death metal" back in their progressive tag, but it will excite people who saw potential in Heritage. Bottom Line: After the misstep that Heritage was, Opeth gets their progressive rock approach right this go-around with Pale Communion.

Been listening to this over the last week more times than I expected I would. The last album wasn't really my bag, but this one leans a bit more towards Watershed, which is fine by me.

f*ck this stupid review, and f*ck what this band has become. If they really wanted to go in this direction, they should have disbanded Opeth, and started a new project. This is undeserving of being labeled as a release by Opeth.

This album is so freaking good. Much like their last release, its musically amazing all the way through. Sorry its not "deathy" enough for some of you HUGE BABIES who think you can tell Opeth what THEIR band should sound like. f*ck off and start your own shitty band, and for the record, my captcha is 159.

I would say that after 20 years of being one of the best songwriters in musicians, Akerfeldt's compositions on Heritage certainly did NOT "lack direction". You just didn't connect with them.