King 810 Memoirs of A Murderer 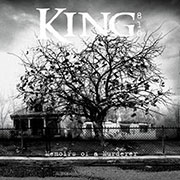 01. Killem All 02. Best Nite Of My Life 03. Murder Murder Murder 04. Take It 05. Fat Around The Heart 06. treading and trodden 07. anatomy 1:2 08. eyes 09. desperate lovers 10. boogeymen 11. Devil don't cry 12. Anatomy 1:3 13. Carve My Name 14. War Outside 15. Write About Us 16. State Of Nature
2014 Roadrunner Records
Our score 4
by Daniel Marsicano
9/3/2014
Controversy has stuck to King 810 since they signed with Roadrunner Records for the release of their debut, Memoirs of a Murderer. Arrests, buzz worthy live shows, and a slew of Internet backlash has given the band a glut of publicity that isn't usually seen from a group putting out their first album. Some have already made their judgements without hearing a single note of music, instead relying upon the band's weapons-toting promotional photos. They may have fit better back in the late '90s or early '00s than they do now, but it appears that King 810 are going to be the next big support act on major tours for the near future, barring any more personal or legal issues. Putting aside all the comments, blog articles, and news items about the band and shifting the focus on the music itself is tough to do. Unless you are going in with no previous knowledge of the band or their backstory, the media blitz can warp the listener's perception. The music is just one part of King 810's aura, which partially banks on their Flint, Michigan roots to give off the idea of this hard-as-nails band clawing through the worst upbringing imaginable and emerging from it angry and bitter. Those two feelings reverbrate through much of this material, and to the band's credit, none of it comes off artificially manufactured. That's due in large part to David Gunn's outlandish vocal performance. The man hoarsely screams, whispers his violent intent, and even genuinely sings with passion. There isn't much in the way of subtlety from him, and there are some cringe-worthy moments, like the muttering cries he sputters out on "Boogeymen," but there isn't another vocalist out there who could have done what Gunn does on this album. A few songs from their proem EP return here, including the anthemic "Killem All" and "Fat Around The Heart," and it might just be a coincidence that those are the most competent tracks. Their groovy, heavy riffs and prominent rhythm has a slightly dated feel, aiming for simplicity and an infectious vibe. It works some of the time (e.g. the two songs mentioned in the beginning of the paragraph) but it gets redundant as the album reaches the two-thirds point. That's where variety becomes a critical factor, which the band attempts to address via a few melodic, acoustic-led songs and two spoken word/freestyle pieces under the "Anatomy" moniker. The former tunes are solid, especially the surprisingly emotional "Devil Don't Cry," but the latter interludes are an unmitigated failure. Dragging on for minutes longer than needed, both are momentum killers and ill-placed on the album, making it tough for the band to regain momentum. It's difficult to digest an album with so many shifting paces. Coupled with the fact that Memoirs of a Murderer is an overstuffed 70 minutes long, there are parts of this album that get to be unbearable. As such, the album becomes a challenge to trot through mundanity in the hopes of encountering a possible gem, and the process is repeated for over an hour. By the time Gunn starts singing with kids on the chorus to "Write About Us," whatever patience you have left may have since dissipated. Getting through this album in one sitting is not easy, and having to do it half-a-dozen times is waging a war against yourself. Breaking it up into chunks while skipping the filler makes the whole experience bearable, but no album should feel burdensome to a listener. Bottom Line: An overly long, messy debut with a few bright spots that don't prevent this album from collapsing under its own weighty ambitions.

This album is pretty difficult to review and this is actually a pretty fair commentary on the record.

King 810 should be unbearable.

80% of this review is spot on but to say that making it through the album isn't easy is bullshit. I agree that the spoken word segments become redundant but to expect to sit and actually listen to spoken word repetitively and like it is insane. This is an actual album when comparing it to the countless metal albums released in the past ten years through various sub genres. At least all the songs do not sound the same, which was obviously highly expected of the band before the album dropped

Backtrack gets an 8 and this gets a 4? The world is coming to an end

What a shitty review

Roadrunner Records are the biggest trolls on the planet

If frankie palmeri could reproduce by asexual cell reproduction and had a bunch of children with down syndrome it would be this band.

Yikes I must listen so I can hate it

Worst shit I ever heard.

These guys used to be The Swellers right?

Garbage butt rock isn't hard to review. That this doesn't have a review score of 1 offends me. No redeeming qualities whatsoever. Shit like this shouldn't even be given attention.

Webby has a huge boner for this band. He puts everything they do in the news and now reviews their cd. Interview coming soon

Worst f*cking crap I've ever heard. Nu metal still exists in 2014? Thought it was all slaughtered in a gunfire since 2004 like they should have been in Flint MI.

figures lambgoat would review this. You guys haven't reviewed anything worthwhile since like 2012

I heard these guys are the new CB4. "My name is David Gunn and these are my memoirs." So you're a murderer? Or a fake murderer? Either way, cool dude....

Listen to NEW Fury of V.

Band sucks. Everyone associated with this band sucks. Dave Gunn used to make out with boys on the front porch of the house they live in. They beat girls and try to act like they are the toughest people in the world. When they are just all pieces of shit who cant do anything without someone having their back.

nu metal is even stoked