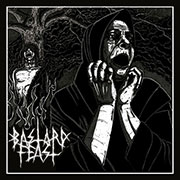 01. Bloated City 02. Old Father 03. The Rats through Our Veins 04. The Serpent Spoke 05. Noose Of Smoke 06. A Tribute To What We Stole 07. Watchful Defiler 08. Claustrophobic Of This World 09. Fields Of Black Cancer 10. Synthetic Messiah
2014 Season Of Mist
Our score 8
by Daniel Marsicano
8/18/2014
Osculum Infame is a Latin phrase akin to "The Kiss of Shame," which is a ritual greeting used by witches. Naming an album with that moniker signifies that what is contained therein are songs seeped in foreboding mystery and tainted views. Thankfully, Bastard Feast does not disappoint fulfilling this potentially bleak vision. The band, formerly known as Elitist, may have changed names, but have lost little of the spark from their last album, 2011's Fear in a Handful of Dust. Sticking to a singular genre description is not what Bastard Feast does, jumping all over from crusty hardcore to sickening grindcore to hopeless doom. Having so many variables in motion could lead to a momentum killing imbalance, but these guys don't succumb to such issues. When they want to go fast and disregard the tradition of proper structuring, it's a thrill to hear. If they decide, "Hey, let's take it down a few notches, but increase the feedback quota," the terror that results is a prized treasure. Songs will transition into each other, giving parts of the album a continuous pull that makes it difficult to discern when a song starts and ends. This becomes abundantly clear near the last third of the album, where "Claustrophobic of This World" and "Fields of Black Cancer" almost feel like a two-part song. The former plays around with more atmospheric instrumentation, letting the guitar and bass spread out instead of pierce forward, while the latter never lets up from the tear it goes on during its first few seconds. Through it all, there is impeccable timing and pacing. Fear in a Handful of Dust began with the five-minute climactic "Burning the Unspoken Gospel," but on Osculum Infame, the first two tracks don't even reach the length of that one. "Bloated City" and "Old Father" are more primal slabs of music, foregoing restraint for uptempo precision. It's a jolting start to an album that doesn't subside much until the last track "Synthetic Messiah," which goes over ten minutes with its slow-churning riffs and gloomy core. "Synthetic Messiah" is a unique track, not only because it's twice as long as the average track on the album, but because of the sprinkling of melody in the guitar work. "Melody" can be perceived as a dirty word for certain metal groups, an attribute that betrays the dissonant essence utilized when frightening listeners with dominating static. Bastard Feast doesn't submit to melody, but takes some cues from it on the almost-catchy riff progression throughout "Watchful Defiler" and the cleaner melodies that attempt to pry through on "The Serpent Spoke." Bastard Feast is able to keep their uninhibited sound, while further expanding on their abrasive slower side with Osculum Infame. From vile screams lost in the thick of the tonal darkness to sinister vibes that cut deeper as each song goes on, the band have fine-tuned almost every aspect of themselves with this album. The chilling agenda represented by the literal translation of the album title is magnified in every inch of this valuable effort. Bottom Line: A few years and a name change later, Bastard Feast are still grinding out ferocious songs that display a slight progression from their last album.

AOTY. Go back to listening to King 810 you Lambgay f*cks

christ on a bike review something relevant

This is relevant you gay

AOTY. Go back to listening to King 810 you Lambgay f*cks love it when dudes say dumb shit like this the irony is astounding

anonymous posted 1 hour ago AOTY. Go back to listening to King 810 you Lambgay f*cks love it when dudes say dumb shit like this the irony is astounding report abuse Assuming it's dudes saying this. Not PXCX bro. Thumbs down dipSHXt.

Never heard of this band, will never listen either, sounds gay. When is the new Attila album out yo?

AOTY. Go back to listening to King 810 you Lambgay f*cks Assuming it's dudes saying this. Not PXCX bro. Thumbs down dipSHXt. So you don't agree that a "person" homophobic and gender issues aside is not stupidly ironic for commenting insults at lambgoat readers while they took the time to read a thread and post a comment?