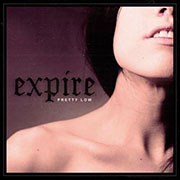 01. Pretty Low 02. Just Don't 03. Fiction 04. Gravity 05. Nobody 06. Old Habits 07. Forgetting 08. Callous 09. Rejection 10. If It Were Up To Me 11. Second Face
2014 Bridge Nine Records
Our score 7
by Luke Henderson
8/4/2014
With the release of several 7 inches and their debut LP, Pendulum Swings, Expire quickly made a name for themselves as enthusiastic revivalists of stripped-down, heavy hardcore. Differentiating themselves from their contemporaries with well-executed, punishing songs, the group quickly earned themselves a spot as a respected and seemingly established act, despite their relatively short tenure as a band. Consequently, many fans and critics alike waited to see if their rapid rise was well-deserved or simply another example of beginner's luck. Furthermore, with their lean and utilitarian style of hardcore, it was unclear whether the band would be able to deliver another album with the same level of intensity and urgency without becoming repetitive and predictable. Fortunately, while not reinventing any musical wheels, Pretty Low is able to quiet naysayers, please fans, and further cement the group's status as a formidable and durable staple in the hardcore scene. The album begins with the title track, which wastes no time delving into the mid-tempo riffs and stomping grooves that have become the band's signature sound. "Pretty Low" is an apt title for both this song and album, as the vocals embody a sense of desperation and veracity that is unmistakably authentic. Several other tracks, including "Gravity" and "Nobody," further explore lyrical themes of alienation, rejection, destruction, and depression in a convincing manner. Unfortunately, these topics tend to become somewhat repetitive and tiresome on this album, with songs like "Just Don't" and "Forgetting" devolving into little more than infantile diatribes. Luckily, this lyrical deterioration is not matched musically, as both are otherwise forceful pieces that showcase the group's imposing song writing abilities. The record continues to pick up momentum with memorable tracks like "Fiction," "Old Habits," and "Callous," which exhibit the versatility of Expire's particular brand of mid-western heavy hardcore. Although stylistic diversity is lacking, this is more than compensated for by galloping rhythms, driving guitar riffs, and trudging, monstrous breakdowns. Each song is further enhanced with a venomous vocal delivery that complements and heightens the intensity throughout. As the album progresses there are moments where the songs seem to blend together. Tempo and cadence seem to bleed from one song to the next, with themes, rhythms, and overall song structures repeating on a fairly consistent basis. This isn't always a negative, as stylistic consistency is often strived for by many hardcore bands, but towards the end of the record, songs like "If It Were Up To Me" seems to lose its impact because of its similarity to many of the album's earlier tracks. Regardless, dependability and an unrelenting sonic drive have served Expire well thus far, so this dynamic uniformity was likely done by design. Bottom Line: Pretty Low serves as a logical successor to the band's acclaimed debut album, Pendulum Swings. Delivering track after track of punishing mid-western hardcore, Expire purposefully forsakes diversity in favor of consistency. Despite certain missteps, Pretty Low is an unapologetic record made by and for die-hard heavy hardcore fans.

Not as good as Pendulum Swings, but it's still a banger. Good f*cking dudes too.

Another solid record from these rad dudes

better production and song structure compared to pendulum swings, step in the right direction for this band, more like the demo and first few 7"s to me.

"Little more than infantile diatribes"----haha that's putting a veeeeery nice spin on it.

Tried to listen. Sounds like dog shit. Couldn't make it through.

Members of this band are the biggest pieces of shit ever. Don't get me even started about the lead singer. That stupid socially awkward introvert who acts as if he's some c-cky straight edge f*ck meanwhile we all know he's just shy and has no social skills. f*ck off from face of earth gays.

Sounds like snoopy2 is a little bitch made girly man who is bummed that josh wouldn't sign his poster. Life flip for you

Expire are a little douchey. Maybes its where there from? idk I like them though. Good Band. The only good band ripping off No Warning's sound IMO ignorant moshy Hardcore at its best

they put on a good live show. not my thing to listen to. they were described to me as "hardcore for girls." that made me laugh.

Snoopy2...so you're saying the scene is about being a c-cky prep? Drop the popularity contest. Hardcore is for misfits not pretentious pricks like you. Do everyone a favor and stop going to shows and listening to heavy music. Its obvious you only do to boost your rep.