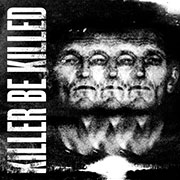 01. Wings of Feather and Wax 02. Face Down 03. Melting of My Marrow 04. Snakes of Jehovah 05. Curb Crusher 06. Save the Robots 07. Fire to Your Flag 08. I.E.D. 09. Dust into Darkness 10. Twelve Labors
2014 Nuclear Blast Records
Our score 7
by Daniel Marsicano
5/20/2014
Greg Puciato, Troy Sanders, Max Cavalera, and Dave Elitch walk into a recording studio, but this isn't the start of some metalhead's tawdry fan fiction. These four musicians have come together as Killer Be Killed, and obviously, the "supergroup" tag was the first thing thrown out about them. Looking past the caliber of the members, the fact that these guys have performed, or still do, with acts like Sepultura, Dillinger Escape Plan, Mastodon, and The Mars Volta gives the band instant credibility. However, that doesn't automatically equate to great music, so the challenge comes in making this band its own entity, without having to be spoken in the same breath as their other projects. Obviously, a common thought will be, "What does this sound like?" Is it some jumbled hybrid of all the bands mentioned in the previous paragraph? Is it something completely abstract and head-scratching? Is it just a boring, plodding mess? Those with keen senses will pick up on aspects of Mastodon or Sepultura here and there, with its thrash undertones and tuneful choruses that the former band has worked on improving over the years. Sometimes, the band will throw something out there that seems offbeat, even for the members involved. Then again, there is a song or two that is sonically limp. All of those factors together make for an album that is always keeping one wondering what will develop. For this band, Puciato, Sanders, and Cavalera share lead vocals. Having all three split vocal duties could have led to a disastrous, ego-ridden clashing of styles. Instead, it lends an adventurous lift to the music, as none of them step on each other's toes. There is harmonizing between them all, and Puciato/Sanders have a great rapport in "Snakes of Jehova" that works off the former's harsh screams and the latter's soaring melodies. The vocals should be the main selling point of this album, though that's not to discount the music itself. There's a load of charging riffs that will get heads bobbing in rhythm, though there's a surprising amount of catchy moments that will get stuck in a listener's temple. Many of these can be credited to Puciato, who knows how to create a tuneful vocal line. "Wings of Feather and Wax" and "Dust Into Darkness" exemplify this aspect of his work in abundance. If you want to just go nuts and not worry about musical semantics, the punky spirit of "Fire To Your Flag" and groovy stomp of "Curb Crusher" will be sufficient. The first four tracks are engaging, full of positive impact, and a delight to take on. The heaviness on display at the end of "Face Down" is complemented by the prominent bass work from Sanders on "Melting of My Marrow." The middle of the album has its uneven spots, like the electronic-tinged "Save the Robots," but there's nothing blatantly distasteful. The album takes a turn into the mundane with the closer "Forbidden Fire," which goes for a spacey, doom-laden tempo that is lacking the drive of the other ten songs. Taking the unrealistic expectations given to Killer Be Killed out of the discussion, this first effort is a solid enough start. There is obvious chemistry between all involved, especially in the vocals. These songs burst into existence, and when the band is up and going, with Elitch slamming the hell out of his drum kit, the band feels like it is at its liveliest. If you are even slightly aware of any of the members involved, this album is worth spending some time with. Bottom Line: These musicians work well together and provide plenty of enthralling moments on their debut, though a few uneven songs weigh things down.

Oh yeah I listened to some songs...horrible,max has not done any good music since leaving Sepultura

The f*cking worst. This album blows so much, Troy often sounds like the douche from disturbed on songs. Not a good song on this heaping pile of shit.