Devil You Know The Beauty of Destruction 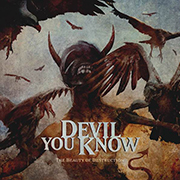 01. A New Beginning 02. My Own 03. Embracing The Torture 04. For The Dead And Broken 05. Seven Years Alone 06. It's Over 07. A Mind Insane 08. Crawl From The Dark 09. The Killer 10. I Am The Nothing 11. Shut It Down 12. As Bright As The Darkness
2014 Nuclear Blast Records
Our score 6
by Daniel Marsicano
4/30/2014
Devil You Know has more riding on their first album, The Beauty of Destruction, than most bands starting out. Of course most of that has to do with the musicians involved: former Killswitch Engage vocalist Howard Jones, All Shall Perish guitarist Francesco Artusato, and Devolved drummer John Sankey. For Jones, it's the first project in which he's had extensive input since leaving his previous band. For Artusato, it's something to do while we all try to figure out what All Shall Perish's next move will be in the wake Eddie Hermida's departure. For Sankey, well, it's another project to show off his drumming abilities. The odor of Killswitch Engage is bound to trail Jones wherever he goes for the near future, which comes from spending almost a decade with the group. So comparisons to them will inevitably pop up, especially on the more radio-friendly tunes like "For the Dead and Broken" and "It's Over," though much of this album is charged-up metal. Jones still does the back-and-forth melodic croon/bloodthirsty scream that he's been doing for as long as people have heard him. Yet some harsher screams back him up, infusing a nasty edge to the vocal work. "A New Beginning" is not just an appropriate name for the first song, but an energetic anthem that does its job of setting the mood for the entire album. Artusato rips out one of the many killer leads sprinkled throughout the album. Those looking for some flashy playing can get that from "A Mind Insane" or "The Killer." Speaking of the former tune, his death metal roots are exposed in the wicked middle portion that almost sounds like it comes from an entirely different band. The Beauty of Destruction is not simply a sonic whiplash of metal, as the band mixes in some tuneful music that has a wider appeal. The two songs mentioned before, "For the Dead and Broken" and "It's Over," are evidence of this technique. The catchiness factor goes up, and the heaviness is toned down. They provide a chance to take a breather, but ultimately provide very little to the product. The same goes for the feeble closer "As Bright as the Darkness," which prances along until it ends, ultimately eliciting little more than a shrug. The consistency of the material is all over the map; some songs have a great chorus that boosts an otherwise average song ("I Am the Nothing") while others seemingly exist to provide a break after a series of high moments ("Crawl from the Dark"). There isn't anything outright offensive, but once a listener gets to the halfway point of the album, all of Devil You Know's tricks have been exposed. Surprises are nonexistent, and when something different does arise, it comes off as lackluster (see "As Bright as the Darkness"). The merit of these musicians is not in doubt, and it will be fascinating to see what the next album will entail (assuming there will be one). This doesn't seem to be a studio project either, as touring has already been announced as of this writing. It appears that the three primary members are looking to get a great deal of mileage out of their partnership with Devil You Know; good thing that the album is solid enough to warrant dissemination to a sizeable audience. The Beauty of Destruction won't change the way people will look at metal and it isn't a prize winner, but there's enough appeal in several individual songs to win over those who like both the hard-hitting and the anthemic sides of metal. Bottom Line: Fans of the musicians involved will get their needed fix of metal, but everyone else will find little worth beyond a few exceptional songs.

What kind of a pretentious regard wrote this review???

Why does everyone overlook that Ryan wombacher of bleeding through is also in this band.

i illegally dled this album to give it a listen.. total garbage.

Very good review,this is just what I expected out of Howard. More of his generic songwriting at work here. The band members are very good,hopefully they improve in the ways this album failed to impress in.