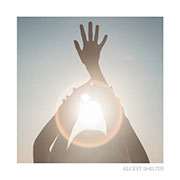 1. Wings 2. Opale 3. La Nuit Marche Avec Moi 4. Voix Sereines 5. L'Eveil Des Muses 6. Shelter 7. Away 8. Délivrance
2014 Prophecy Productions
Our score 8
by Daniel Marsicano
2/6/2014
For those who have kept tabs on Alcest for the past decade, Shelter won't come as a shock. It's the most low-key album the band has produced so far in their eccentric career, where the very idea of black metal has become obscene to their vision. That's right: no remnants of their aggressive sound remain on Shelter. The band has embraced a more lively way to get their music out, without having to rely on raspy screams or pummeling riffs. Shelter will piss off a great deal of people, but in doing so, Alcest has transformed into the band they've been fighting to become all along. 2012‘s Les voyages de l'âme was a fertile third album for Alcest, though the band appeared tied to their harsher roots, holding back the potential on tracks like "Summer's Glory." With the black metal flushed out of their system, they are free to dig into the airy nature that was underlying even within the ruthlessness of their past. The album is like one long dream, perfect mood music for relaxing or a stress releaser after a tough day. It takes two or three songs to really get into that groove, but it's hard to escape from once that point is reached. What's striking about these eight songs is how pretty the melodies are, their tuneful spirit ringing out far over the course of the whole album. There's very little striking about the musicianship of Neige and Winterhalter, who complement each other without overshadowing one another. Winterhalter's drums are low in the mix, which was done intentionally to enhance the delicate sonic atmosphere, but they aren't forgotten either. The band has never been about an abundance of neoclassical shredding, and it would detract from the rich atmospheric traits of each song. These traits are spread evenly throughout, from the upbeat tempos of "Opale" to the bass line cutting through the rest of the instruments on "L'éveil des muses." The album has a steady tempo and there is nothing that stands as abstract or out of place. Female vocals provide some balance to Neige's restrained vocals, especially on the majestic closer "Délivrance." The best cut is the folksy, acoustic-led "Away," featuring lead vocals from former Slowdive frontman Neil Halstead. That's not to say that Alcest has gone completely soft. Though the abrasive riffs and muffled production have disappeared, the band has not forgotten how to pick the energy up. Packed into the middle of the album, "Voix sereines" rips through a heavier tone that is a pleasant pick-me-up after three softer tunes. Heavier does not equate to brutal though; even at their most electric, the band is nowhere near the levels of their past few albums. Moving away from black metal was the best decision Alcest could have made. They seem comfortable in this style, and the pop/shoegaze influences feel more relevant on these tracks than on previous albums. The band does not stretch out more than it needs to, and Shelter ends right at the most appropriate point. It doesn't hurt that there are some straight-up infectious moments on here, including the title track and the aforementioned "Away." When a band creates an album like Shelter, there are those who throw up words like "shocking" and phrases like "out of their comfort zone." None of these apply to Alcest's evolutionary sound, as it feels both surprising and expected all at once. With Shelter, the band is giving up on pleasing a select audience and looking to not only make their music more accessible, but satisfy their own desires. The reaction for Shelter will be polarizing, no doubt, but that does little to lessen the significant value of this gem. Bottom Line: Alcest has come a long way from their Le secret EP, and the end product is fantastic.

good band, good album. many of the gays on this website won't appreciate this.

Will get this. I guess I'm a hipster gay, but I love most all the alcest, lantlos, ameseurours ( or however you spell it) stuff. I haven't gotten the last couple albums because it is a bit weird mixing the black metal screams with their tunes, but from what ive heard this just sounds like straight up shoegaze. Not to mention the co singer of slowdive is on a track and they are one of my all time favs. Suck me off fegget.

sucks - for people who like the idea of metal but want to appear "smart". Starbucks metal, we don't need it.

I'm gay and I love this album