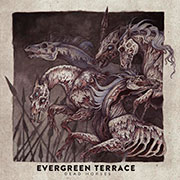 01. Crows 02. When You're Born in the Gutter, You End Up in the Port 03. Post Satanic Ritual Baby 04. Dead Horses 05. Browbeaters Anonymous 06. It's All Over But the Cryin' 07. Lacuna Inc. 08. Mike Myers Never Runs, But He Always Catches Up 09. The Fortunate Ones 10. That Dog'll Hunt
2013 Rise Records
Our score 5
by Luke Henderson
1/16/2014
Evergreen Terrace's latest album seems to have somewhat of an ominous title at first glance. The name Dead Horses elicits thoughts of old, tired clichés being dressed up and reused ad nauseam, which makes the title fairly apropos. With their first album released over twelve years ago, Evergreen Terrace has had time to hone their craft and firmly establish themselves in the metalcore scene. What remained to be seen in the lead up to the release of Dead Horses was whether the album would provide a new twist on the band's established sound, or firmly plant the group in increasingly stagnant and tiresome territory. One thing is without question, the group itself has entered new and uncharted waters. This album marks the first appearance of Alex Varian on guitar after the departure of founding member Josh James, with former bass player Jason Southwell returning to the fold after a 3-year hiatus. To accompany the personnel shake-up, the band also parted ways with long-time label Metal Blade Records and landed on the Rise Records roster. From the first notes of the opening track, "Crows," there is no doubt that despite all of these changes, the group has no problem crafting dynamic and jarring songs. This lively track mixes guttural screams, galloping drums, and melodic vocals with the signature metalcore breakdowns in a familiar but enjoyable way. Following this, more mediocre tracks like "Post satanic ritual baby" and "Dead Horses" blend heavier elements with a decidedly softer edge that really differentiates this album from the band's past work. While Evergreen Terrace has always unabashedly melded hardcore and metal aspects with clean vocals and catchy hooks, there is an distinct pop-punk vein that runs throughout this record. Comparisons to bands like A Day to Remember are undoubtedly going to be made, with reason, as the structure and style of these songs seems somewhat tired and derivative at this point, albeit quite catchy at times. Tracks like "Browbeaters Anonymous" and "Lacuna Inc." provide powerful riffs and bursts of fury, but they are also unfortunately saddled with formulaic melodies and disjointed song structures. For such an established band it seems, at times, as if Evergreen Terrace is still searching to find a sound that they are comfortable with, which consistently breaks the flow of various songs and is detrimental to the album as a whole. That being said, this album is not without its impressive elements. "Mike Myers never runs, but he always catches up" demonstrates just how well this band can write when they want to. This song features recognizable metalcore rhythms fused with break-neck riffs and demonic vocals, producing what quickly becomes an album highlight. Following close on its heels is "That Dog'll Hunt," which finishes off the record in a strong fashion by using well-placed clean vocal interludes to contrast against punishing tempos and inventive song writing. Unfortunately, tracks like these seem like too little too late, and further highlight the missteps that take place throughout the majority of this record. Bottom Line: Although there are notably impressive moments on this record, there is nothing that fully makes up for an otherwise disjointed and lackluster performance.

Total and utter irrelavance is stoked. Landfill sites are stoked

Is the reviewer on drugs ? I have no idea what he is talking about. Dead horses is an extremely solid release

Lambgoat gods, please put an open request for reviewers on the main page. Take a day or two to filter and find 3-5 solid people that can write and have an interesting perspective on heavy music. This reviewer's context is thin (probably a good thing since we are talking 2000s metalcore) and he/she lacks discernible wit and insight. Shit review, shit album.

sucks like all of the other releases from this mundane and irrelevant band.

It is nothing like a pop punk record and if anything, the terrible ADTR are ripping off bands like Evergreen Terrace! The hardcore/metal scene is richer for bands like ET! Reviewer has c-cks in his ears!

"Reviewer has c-cks in his ears!" holy shit made me LOL. Not a bad record, basically just ET as stated below. Will be surprised to see if they keep it going.

Are real reviewers too scared to write for Lambgoat? "Although good, it doesn't live up to expectations blah blah blah" is about the most generic phrase you can say. You listened to the record twice and then crapped this out because your deadline hit. Well done.

I Thought this review summed up this bands entire discography. Can anyone tell me which ET album was not mediocre metalcore. In other words shitty played out metal core.