Deicide In the Minds of Evil 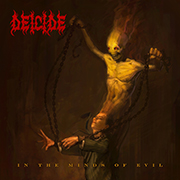 01. In the Minds of Evil 02. Thou Begone 03. Godkill 04. Beyond Salvation 05. Misery of One 06. Between the Flesh and the Void 07. Even the Gods Can Bleed 08. Trample the Cross 09. Fallen to Silence 10. Kill the Light of Christ 11. End the Wrath of God
2013 Century Media Records
Our score 7
by Daniel Marsicano
12/12/2013
When a band has been cultivating a premier death metal style since the late ‘80s, expectations inevitably become a factor. People don't crank up a Cannibal Corpse album expecting ten-minute progressive metal songs; they want their faces caved in. Complacency developes as a real threat too. It's simple for a group to go in the studio, crank out a dozen tracks that all sound alike, and throw it out to the masses. The hardest thing for any band to do is to straddle the line between relevancy and traditionalism, so as not to piss off the ravenous diehards and alienate a new generation of listeners at the same time. Eleven albums in now, Deicide has accomplished about as much as any death metal band can. They had a collection of well-renowned albums that stretched over the entirety of the ‘90s, kept chugging through a down period in metal, and stayed alive when Eric and Brian Hoffman left in 2004 to open up two guitar spots. Those spots are now occupied by Jack Owen and newest member Kevin Quirion, who both leave their impressions on In the Minds of Evil. What could have been an average/typical Deicide record is bolstered by their presence, plus an inspired performance from founding members Glen Benton and Steve Asheim. With the exceptions of a modern production gloss and fresh blood in the band, In the Minds of Evil crosses off every requirement of a Deicide album. You've got the blasphemous lyrics, which are embedded into their DNA, the absolute collapse of sensible melody, and blast beats that sit alongside uproarious riffs. There isn't much experimentation to be found, so that means no piano outros, extended instrumentals, or long samples. Similar to their last album, To Hell with God, the songs are kept succinct, with none of them going past the four-minute mark. Though Ralph Santolla is a great guitarist, and he provides a neoclassical flavor with his leads, the lead guitar work is much grittier this time around. That may have something to do with Quirion's presence. Underground metal fans will know Quirion from his work with Asheim in Order of Ennead, and the death/black influences of that band creep into the music on this album. That's not to say this is the fastest or most brutal album of Deicide's career, but there's a menacing uneasiness behind the work of Quirion and Owen that's hard to ignore. Deicide has always been one of those bands that start their albums off with a killer cut and do little to jar the momentum after that. The title track is a great start, and rumbles with the rage Benton sparks via his vile growls. The songs have a tendency to bleed together, especially once the band passes through the seething mid-tempo pacing of "Between the Flesh and the Void." Though, smartly, they save two of the best vicious tunes for last with the catchy (well, as catchy as Deicide can be) "Kill the Light of Christ" and the anthemic "End the Wrath of God." It may be fair to call Deicide the "Motorhead of death metal," but that moniker doesn't negate the positive steps the band has taken since (arguably) their last high point, 2006's The Stench of Redemption. That was such a great comeback after the loss of the Hoffman brothers that it's tough to rise to that level every album. In the Minds of Evil is the first album since The Stench of Redemption that feels like the band is back on the right path after two uneven studio efforts. Though In the Minds of Evil won't be put on the same pedestal as their eponymous album or Once Upon The Cross, the band has not settled upon drifting through their later years like so many other bands. Though youth isn't on their side anymore, decades of experience and a red-hot hatred towards religion take precedence now. The album gives fans what they want, and lets a younger audience know that these veterans are not letting the up-and-comers hog the spotlight. Bottom Line: Though not a grand redesign or a return to the glory days, In the Minds of Evil keeps the Deicide name afloat with its brand of death metal fury.

oooohhhhhh deicide is so scary and evil and badass... this must be what the lambgoats want! PUKE

This is a great album! Worth the purchase and will have a long life of listens from me. Every bit catchy as it is brutal. A rip my face off good time.

Glen Benton, I would like you to take a listen to my band Islander. Contact me, I will make sure your Deicide band members receive proper musical education by Islander and one Tony Brummel.

Islander, sorry but I choose Deicide.

Deicide - The Stench of Redemption