Close Your Eyes Line In The Sand 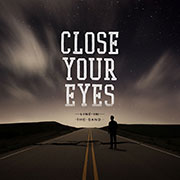 01. Deus Ex Machina 02. Burdened By Hope 03. Days Of Youth 04. Line In The Sand 05. Frame And Glass 06. Sleeping Giant 07. Kings Of John Payne 08. No Borders! 09. The End 10. Higher Than My Station 11. Skeletons 12. Trends And Phases 13. Glory 14. My Way Home 15. Follow The Sun
2013 Victory Records
Our score 6
by Luke Henderson
12/4/2013
Every band is forced to come to a crossroads when a member departs, and this crisis is usually amplified when the person that leaves is the group's frontman/vocalist. This is the exact predicament Close Your Eyes found themselves in when singer Shane Raymond parted ways with the group, leaving them in the lurch and forcing the question as to whether the band should continue. These Texans decided to soldier on with Sam Ryder (Blessed By a Broken Heart) assuming Raymond's role for the band's third album, Line in the Sand. As if to prove that they were far from defeated, Close Your Eyes unleashed a particularly protracted release, totalling a bulky 15 songs comprised of their specific punk and rock-influenced brand of melodic hardcore. First off, although bringing a somewhat more natural or organic sound, Ryder's vocals aren't remarkably different from his predecessors, despite the noticeable British accent. There is still a healthy blend of guttural screams, melodic choruses, and harmonized sing-alongs, which will be a great relief for fans of the band's previous works. Ryder also gets help from a couple seasoned vocalists on the tracks "Sleeping Giant" and "The End," with mixed results. "Sleeping Giant" features vocalist Tommy Green (Sleeping Giant) in an awkward mash-up punk verses, metalcore choruses, and even a metallic rap-laden breakdown. "The End," on the other hand, is an album highlight, riding on the strength of Zoli Teglas' (Ignite) impeccable vocals, melody-driven hooks, and infectious riffs. Like the songs featuring outside help, the rest of Line In The Sand is mixed bag. Tracks like "Burdened By Hope" and "Line In The Sand" display the band's ability to mesh punk and metalcore through focused song-writing and well-placed tempo changes. Unfortunately, the momentum is lost on tracks like "Frame and Glass" and "Trends and Phases," which trade blistering guitar lines and crushing breakdowns for bland alternative-rock trappings and forgettable, overwrought harmonies. While the group's strength definitely lies in their harder and faster material, "Kings of John Payne" demonstrates their ability to write strikingly delicate rock anthems that are simultaneously vulnerable and empowering. Sadly, this track is more of an anomaly than the rule for the group's softer efforts. The album regains its metallic edge with the crushing "Skeletons," which only gets heavier as it progresses. Like some of the album's other strong songs, this track demonstrates the true capabilities of this band when it comes to writing imposing songs in a variety of related genres. Unfortunately, the album trails off after that, with run-of-the-mill tracks like "Glory" and "My Way Home," which seem to wander aimlessly and consistently fall flat. Bottom Line: It seems that Close Your Eyes would benefit greatly from exercising greater discretion when it comes to which songs comprise an album. While far from perfect, half of the songs on this 15-song epic significantly outshine the others, and could have been used to build a much tighter, albeit shorter record.

Lambgoat does no reviews for almost 2 months and this is what we get? Shit band, shit review.

This band is terrible. This is actually a little bit worse than the other material I have heard and the vocals are an obvious difference but certainly not an improvement. This is dull, mundane and repetitious. Shit band.

I was actually a fan of their first 2 albums, but this one is pretty awful. And I dont think its fair to solely blame the new singer for this, because he is a pretty damn good singer. But I cant explain what it is. Maybe having a light, alternative rock song next to a beatdown hardcore song. It just doesnt flow. The album feels more like a mix cd of a bunch of different bands rather than the same band all the way through.

if you didn't at least like this band's previous work, you are a sucker. I heard Devil's Blood has a new release to go pleasure over.

Wait forever for a review and then get this dog shit. Merry Christmas to you too fa990t

i like this band. don't get down with the god shit but they bring it!

They named their first song after a motorcycle company.. not a good start. Sorry dudes.