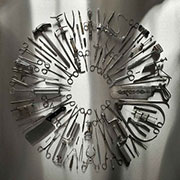 01. 1985 02. Thrasher's Abattoir 03. Cadaver Pouch Conveyor System 04. A Congealed Clot of Blood 05. The Master Butcher's Apron 06. Noncompliance to ASTM F 899-12 Standard 07. The Granulating Dark Satanic Mills 08. Unfit for Human Consumption 09. 316 L Grade Surgical Steel 10. Captive Bolt Pistol 11. Mount of Execution
2013 Nuclear Blast Records
Our score 9
by Daniel Marsicano
9/23/2013
Whenever a band as highly regarded as Carcass reunites after a lengthy absence, the first response from fans is, "When are you going to release new material?" That is a question that can pester a band for years, and the longer they stay reunited, the stronger the calls for it get. At that point, every interview the band takes part in seems to revolve around the prospect of a full-length release. So six years after they came back together, Carcass has answered the cries with Surgical Steel. With a catalog comprised of several gems, it's understandable that there would be a comparison between Surgical Steel and the five other studio albums albums in Carcass canon. Is it fair to do? Of course not. It's been 17 years since they released a full-length record, an eternity in the music world. To their credit, they haven't gone and thrown in much of the way of modern influences. This isn't breakdown city and the production isn't slick to a fault. Surgical Steel sounds how Carcass should in 2013, and that's one of its best qualities. Bassist/vocalist Jeff Walker and guitarist/vocalist Bill Steer, two original members, have returned, and they treat this band as a full-time gig. Though they are involved with other bands (notably Steer with Angel Witch and Gentlemans Pistols), this material obviously received great attention. The band pulls from every era of their existence, save for the grind-ish Reek of Putrefaction debut. Fans will pick up on a few nods here and there, but it's nowhere near as obvious as it could have been. It seems odd that they start off with a rousing heavy metal instrumental in "1985," though the soaring guitars are wiped aside by the brutal "Thrasher's Abattoir." If a listener was hesitant about the band's intentions, that track should eliminate any doubt. From there, Carcass goes off and doesn't settle for a moment of reflection until the acoustic guitars during the early moments of the eight-minute opus "Mount of Execution." Surgical Steel is a direct punch of death metal, though the band avoids sullying it with unnecessary additions. Other than the brief acoustics used on the closer and former drummer/vocalist Ken Owen providing guest vocals on a few tracks, this is all Walker, Steer, and new drummer Daniel Wilding. This line-up is as strong as any previous ones, and it shows in the frantic nature of "The Master Butcher's Apron" and quick pacing of "Captive Bolt Pistol." The years have not dulled the anger or intensity of their music, and there's more than enough aggression to satisfy long-time fans. Carcass has been known to expand into melodic territory, especially with their last few albums. While this isn't all good vibes and pleasant thoughts, the guitars do more than just beat the listeners to death with riffs. Harmonies are prevalent, especially on "The Granulating Dark Satanic Mills," and the solos aren't just noisy affairs. The band even has their instances of catchiness, like the closing moments of "316L Grade Surgical Steel," which makes the album even easier to get into. Surgical Steel does not just qualify as one of the best death metal albums of the year, but can also be placed along albums like Heartwork and Necroticism - Descanting the Insalubrious as an equal. The members of Carcass don't half-ass this material, or just rehash older riffs. The band takes bits from their past, but do it without copying a particular sound. Having to wait almost two decades for a new album is torturous for diehard fans, so thankfully, Carcass doesn't disappoint with Surgical Steel. Bottom Line: Carcass returns with a fury after 17 years with an album that can stand up to their other full-length releases with ease.

My grandpa is stoked

Your grandfather has better taste in music than your bitch-ass ever will.

I'm my own grandpa

Along with Satan's "Life Sentence" this is my co-album of the year. It definitely lived up to all of my expectations and then some.

I love this albums. You could listen to it again.

hibuddywhazup is still stoked for AX7 new album instead

I Call It Quits After Swansong.One Of The Best Bands Ever.Not Into This At All.Underated Band And One Best Drummers Ken Owen.Those Blasts From Heartwork Lp.Even Dave Lombardo Coundnt Play That.