Counterparts The Difference Between Hell and Home 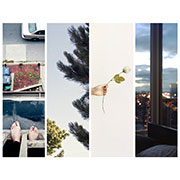 01. Lost 02. Ghost 03. Debris 04: Outlier 05. Witness 06. Decay 07. Compass 08. Wither 09. Cursed 10. Slave 11. Soil
2013 Victory Records
Our score 7
by Daniel Marsicano
8/26/2013
Counterparts made major headway with audience building thanks to their second album, The Current Will Carry Us. Their melodic hardcore really registered with listeners that enjoy honest lyrics with their sonic spin kicks. The Difference Between Hell and Home isn't a surprising leap ahead or unexpected route for Counterparts to go creatively. With their third album, the band expands upon previous ideas and loosens up their melodic components, letting them take up a greater role in the music. That's not to say that this is a mellow ride for Counterparts. Descriptions of the album have labeled some of these songs among the heaviest the band has composed to date, and that's very accurate. "Slave" is a full-on mosh-fest; it's two minutes going from a punk attitude to a hefty breakdown that would make Bury Your Dead proud. "Outlier" gets downright brutal (at least as brutal as a melodic hardcore band can get), though makes some effort on the dynamic front with brief melodic vocals that show some range. There isn't much of a softer vocal style on The Difference Between Hell and Home, leaving the work up to the hardcore barking and yelling. The lyrics have a personal touch, though it gets overwrought at times. Most people will dial into the music itself, which has enough bouncy groove to get crowds moving. "Lost" does a great job with this, and as an opener, it's effective. It comes in around two minutes too, which makes it more like a savory appetizer than a festive entree. Where Counterparts has made the greatest strides is with stepping out of the box they tend to put themselves into. Their last album teased this with tunes like "The Disconnect," but it comes fully out with this release. "Debris" still maintains a capacity for aggression, but masks that with a temporary soothing guitar melody. "Decay" works the restrained angle the best, acting almost as an extended interlude that avoids getting too electric. The song lets the listener enjoy a moment of relief before the beating continues for the rest of the album. The band has a knack for getting their point across within a certain time frame, usually about three minutes or so. That's been their strategy since the early days, with a few exceptions here and there. This album does have these abnormalities as well, mainly with the crushing "Compass" and massive closer "Soil." The latter, taking up almost six minutes, plays around with guitar feedback and a slow-burning conclusion that doesn't pop to life at the moment you think it will. The lack of a payoff is disappointing, though there is some solid snare drumming during the finish. If you've been privy to Counterparts' existence over the past few years, The Difference Between Hell and Home won't be much of a shocker. They toy with their formula, boosting the energy of their hardcore parts, while fleshing out their melodic dynamics. It's a template that has been progressing since their first album, Prophets, and the full effect is just starting to kick in now. If melodic hardcore is your kind of music, The Difference Between Hell and Home should be sought out. Bottom Line: Counterparts continues to explore their melodic side, along with upping the aggression via their hardcore roots.

As a fan of this band, I'd say this was a really accurate review. Well done.

Best album of the year so far. So angry, so much passion, flawless.

accurate review for sure. 7/10

lol posted ten thousand times on a shit board, idiot