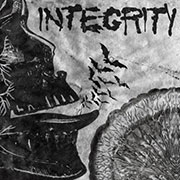 01. Suicide Black Snake 02. I Know VVhere Everyone Lives 03. Beasts as Gods 04. There is a Sign 05. +Orrchida 06. All is None 07. There Ain't No Living in Life 08. Detonate VVorlds Plague 09. Into the Night 10. Lucifer Before the Day Doth Go
2013 Magic Bullet Records, A389 Records
Our score 7
by Luke Henderson
7/6/2013
After 25 years many bands struggle to stay fresh, interesting, or even remotely relevant. Fortunately for fans of dark, metallic hardcore, Integrity has never fallen prey to such a fate. Vocalist Dwid Hellion and a continually rotating cast of band members have been able to keep this group both active and pertinent for over two decades by turning out consistently interesting and sinister hardcore. With the release of their latest effort, Suicide Black Snake, the question remained as to whether Integrity would be able to retain a position of significance in a consistently evolving hardcore scene. Fortunately, from the first notes of the title track there is little doubt as to whether Integrity still has something to offer. Churning riffs, agonized screams, and brief melodic interludes and solos make songs like "Suicide Black Snake" and "I Know Where Everyone Lives" memorable, and help to set the tone for this hostile and brooding album. Despite a clear blues influence on certain tracks, songs like "Beasts as Gods" and "+Orrchida" are forceful reminders of just how well Integrity can write the kind of ominous, aggressive hardcore that has long made the band both infamous and revered. Despite a number of impressive tracks on the latter half of the album, however, there are some definite missteps on this record. "There ain't No Living in Life" offers a melodic reprieve from the unending aggression of songs like "All is None," but it feels somewhat directionless and misplaced. While this muddled blues jam may have its low points, it does not compare to "Into the Night"; the album's penultimate track will leave a bad taste in the mouths of listeners by delivering tired, derivative riffs and ill-fitting instrumental overlays that only become more obnoxious after repeated listens. Thankfully, the aforementioned low-point is sandwiched between two of the record's best tracks. "Detonate Worlds Plague" is one of the Suicide Black Snake's fastest and most brutal songs, showcasing Integrity's unending ability to write relentless, destructive, and memorable music. "Lucifer Before the Day Doth Go" ends the album with an ominous and ethereal track that best exhibits the bands new blues-driven direction without becoming self-indulgent or mundane, as was the problem on other tracks. Bottom Line: Suicide Black Snake delivers punishing, belligerent, metallic hardcore that will surely please even the most skeptical Integrity fan. Unfortunately, this album is not without its problems, with several missteps detracting from what is an otherwise impressive outing from this iconic band.

Enjoyed the new tracks but I'm a little bummed that they reused some songs, even if they are souped up a little.

Why is every review from Lambgoat seem to be a 7-8? Is this the safe way to keep your sponsors, but not seem to easily pleased. Your reviews have stopped being helpful...

the new songs are great, the remade songs from previous splits/etc sound great, I wish there were a few new songs on it, but its a damn good record. fan!

I meant a few MORE songs, thanks stupid fingers of mine..now go listen to this record guys, see them play, buy it, etc.

'Your reviews have stopped being helpful...' Piss off you shit for brains. It's not as easy as it looks. ~ Luke

A good record! For fans of my band, PALE CREATION! -Nick fiction

writing a record review isn't difficult at all homey, knowing your subject matter helps quite a bit but it ain't hard.

'Your reviews have stopped being helpful...' Piss off you shit for brains. It's not as easy as it looks. ~ Luke" That's not me. People can write/think want they want. It doesn't bother me. Real Luke.

'Your reviews have stopped being helpful...' Piss off you shit for brains. It's not as easy as it looks. ~ Luke" That's not me. People can write/think want they want. It doesn't bother me. Real Luke. Hey jerks. Stop being dickheads. Real Legit Luke

no gaza_luke, no care. also, this record is still great.

it was better with the jochums