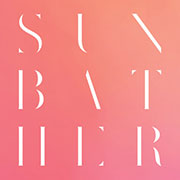 1. Dream House 2. Irresistible 3. Sunbather 4. Please Remember 5. Vertigo 6. Windows 7. The Pecan Tree
2013 Deathwish Inc.
Our score 7
by Daniel Marsicano
6/26/2013
Deafheaven's first album, Roads to Judah, generated a wide response; a reaction was not hard to get out of a metal fan when Deafheaven came into the conversation. Their new album, Sunbather, won't mute the feverish opinions. It seems like this is the album that will bolster the widespread attention that began after the release of their debut. Sunbather is a sophomore effort that will get people talking, though perhaps not always for the right reasons. It's not hard for a writer to get caught up in the Deafheaven hype, slap a 10/10 on the review, and act like the band is the second coming of some lost musical art. Looking at Sunbather with a clear head, away from social media and endless press releases, is the best way to take on the album. Their static black metal and raspy bellows dance around an almost indie rock mentality, as if Alcest decided to change their lyrics to English and brighten their sound up (in fact, Alcest's Stephane Paut provides guest vocals to “Please Remember"). Though this isn't a concept album, its structure nearly demands a complete experience. Every song is followed by an interlude, which is just a way for guitarist/bassist Kerry McCoy to have space to experiment. This is also where the band's vision begins to get muddled. Roads to Judah was relatively efficient, with four songs under 40 minutes. These interludes, other than the pleasant jamming behind “Irresistible," tend to drag on and seem overinflated. The drawn-out field recordings that comprise “Windows" make it the worst offender. The frustration that comes from five minutes of nothingness on “Windows" is almost worth trudging through when a lush tune like “The Pecan Tree" follows it. Sharper production values allow multiple facets of the band to shine. The prominent songs, like “The Pecan Tree," develop from the seeds of tremolo-picked guitars and machine-like drumming. An introspective break, where the band's melodic side can breathe, is never far away, and that keeps the double-digit lengths more palatable. The album is heavy on repetition, especially from vocalist George Clarke. Lyrics like, “I gazed into reflective eyes/I cried against an ocean of light," are repeated at least twice to bring home the overwrought effect. Sometimes it can feel like the band is dragging its feet, pushing the listener to the point of exhaustion; there's a good chance they'll get there too (thanks to the aforementioned interludes). Despite its missteps, Sunbather is the obvious successor to Roads to Judah. Everything attempted on their debut, from the slow-building melodic start to “Violet" to the profound piano outro in “Tunnel Of Trees," is further developed on Sunbather. “Vertigo" takes almost 15 minutes to reach its conclusion, but there is hardly a dull moment with its lengthy, proggy build-up. “I want to dream" is screamed over and over by Clarke, while McCoy strums a guitar lead, on brash opener, “Dream House." A progression of their sound, this is not an album that will be stuck in the deep underground scene for long. If there was a better time for Deafheaven to break out than with this record, I'd like to know what it is. Sunbather does little to sway those already hesitant with the band, though most likely, the band couldn't care less at this point. They do what they do, and either we all come along willingly or just sneer and crack jokes at them. Bottom Line: Sometimes intoxicating, sometimes frustrating, Sunbather sees Deafheaven taking the foundation established on Roads to Judah and building upward with more diverse songwriting.

They should wear pink corpse paint and call it even steven.

Album is so boring. I'd rather watch an elderly person struggle to eat their dinner.

Good review. These guys aren't doing anything that hadn't already been done by 2002. They're just selling it to kids who've never heard of Emperor or Weakling.

uh, it's an 'obvious successor' to their previous LP because this is the first LP they've released since. were you looking for the similar platitude of 'logical progression'?

I feel as though the reviewer was taking more of a personal review with that as opposed to reviewing it for everyone else. Definitely not a good reviewer.

ive had my emperor records and my one weakling record for over a decade yet I still think this is a killer album.Not every album has to be a style that has never been explored before or has to be compared vs other albums to determine its worth. They took influences from multiple existing bands (including weakling, WITTR and even hopesfall and converge and of course MBV at times) but pulled it together into an awesome album imo. Easy 8 for me in terms of enjoyment and that's really what matters.

this album is an obvious 9. you just have to take it for what it is.