Terror Live By The Code 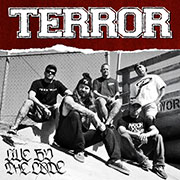 01. The Most High 02. Not Impressed 03. Cold Truth 04. I'm Only Stronger 05. Live By The Code 06. The Good Die Young 07. Shot of Reality 08. Hard Lessons 09. Invasion 10. Nothing In Your Head 11. One Blood
2013 Victory Records
Our score 8
by Luke Henderson
4/18/2013
When Terror signed with Victory Records, it came as a surprise to those familiar with the veteran label's current roster. Furthermore, Terror, quite possibly one of the most highly respected and dependable bands in hardcore, had paired with one of the most notorious labels in the business, which seemed especially odd because of the band's near constant focus on integrity and respect within hardcore. Whatever the reasoning behind the move, some people wondered whether this event would mark a sonic change for the band as well. Fortunately, this was not the case. Rather than embracing the more passé and/or trendy aspects of many current Victory Records bands, Terror has doubled down and created yet another memorable and authentic hardcore record. Beginning with "The Most High", Scott Vogel and company mix aggressive instrumentation, raucous gang vocals, and crushing breakdowns to create one of the most memorable tracks on the album. This expertly executed lead-off track is quickly followed by "Not Impressed" and "Cold Truth," which blend faster riffs and other punk elements to help satisfy those looking for more than your typical chugging hardcore. Songs like "The Good Die Young" and the album's title track embrace the stripped-down DIY ethic in both music and lyrics, mixing Vogel's unflinching scream with hard-hitting verses and anthemic choruses. These tracks, like most on this album, were very obviously designed to be played live, and will no doubt be the soundtrack to pile-ons and mosh pits at Terror shows in the near future. Fortunately, they don't just fall into that ‘I bet that would sound good live' category, as the production on this album easily captures and translates all of the intensity present in each song. Continuing as the darker, rougher sibling of the band's last album, Keepers of the Faith, the latter half of Live By the Code blends tempos and styles with enough frequency to keep even the most fickle listener interested, while never straying too far from the sound that Terror has become known for. To round out the record, tracks like "Hard Lessons," "Nothing In Your Head," and "One Blood" stick out as examples of how trudging riffs, sing-along choruses, and non-stop intensity can makes for fun and memorable songs, even if it isn't necessarily the most inventive or original combination. Bottom Line: With Live By The Code, Terror shows yet again why they have become known as one of the most consistent and highly regarded hardcore bands playing today.

The review sounds like you're giving it a 10 since there's almost no negatives said.

Whats the Vogelism for "stop it in the name of all that which does not suck"?

8 is a justified score based on the review considering he mentions how unoriginal it all is several times. Pretty spot on actually.

I love this record, overall, even though it has a few average tunes. However, the hits - Most High, Live by the Code, The Good Die Young, Nothing in Your Head, and One Blood, are instant classics. Nothing mindblowingly original, but that is not the point. Certainly at easy 8 for me.

Don't end a sentence with a preposition.

Terror has put out more great albums then most hardcore bands ever will, but they lost me with keepers of the faith, it was so boring that it made me lose interest in anything they put out in the future.

another boring ass 'hardcore' record made by terror. we hate 'fakes' but we signed to victory.

real hardcore has hooks. This album getting an 8, really discredits lambgoat.

Grow up and quit with all this fake positive, unity, family, retard shit.

Lambgoat seriously used to have GOOD reviews, this is just sad now.

the cover looks like it was done in MS Paint. i guess not giving a shit about your album cover is cool tho. spend weeks on recording the album but only an hour on the cover. good for you!!

live by the chode

Scott vogel got 20 bindles of heroin as a signing bonus.

The deluxe album bundle includes a pair of air maxes, camo shorts, and a life-size cut out of Scott Vogel.

for someone talking about how important the packaging on this record is it looks like a f*cking autistic kid made this in 1998.

Another EP claiming to be a full-length? This things is like 20 minutes long! It doesn't even count as a full-length!

I love terror, but this review is horseshit. What the f*ck. Say something bad about the album, it's clearly not their best. How can you possibly give it an 8? It's simply not an 8, in comparison to the rest of their catalogue, or on any other scale of hardcore. I seriously hope whoever wrote this review is banned from publishing reviews.

Great album - and it is indeed there best one. As for the haters...just don't listen to them, easy as that.

"Great album - and it is indeed there best one. " Really guy? Better than Lowest of the Low or One with the Underdogs...I think not.

Terror - The Walls Will Fall Terror - The Damned, The Shamed Terror - Always The Hard Way Terror - One With The Underdogs Terror - Lowest Of The Low