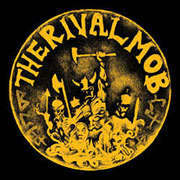 01. Intro Grunt 02. Mob Justice 03. It Must Be Nice... 04. Boot Party 05. Life Or Death 06. Fake Big 07. Be Somebody 08. Friendly Freaks 09. The Brutes Of Force 10. Self-Esteem 11. Cheapo Grosso 12. Thought Control
2013 Revelation Records
Our score 9
by Luke Henderson
3/10/2013
In a world filled with hyphenated hardcore sub-genres, it has become increasingly rare for a band to strip away all pretense and deliver straightforward, aggressive hardcore without any unnecessary frills. Fortunately, The Rival Mob continues to fight to retain their title as the undisputed leaders of no-nonsense hardcore. After 2009's Raw Life and (quite the aptly named) follow up EP, Hardcore for Hardcore, The Rival Mob not only won over a significant portion of the hardcore community, but also became infamously known as one of the most aggressive, honest, an unapologetic bands around. Add to all of that signing with the legendary Revelation Records and it becomes plain to see just how much has become expected of this group. Playing in a stripped-down, no-holds-barred hardcore band can be a deceivingly complicated task. If the riffs become too derivative or the songs too formulaic, then you run the risk of becoming predictable and forgettable. If you embrace different styles but fail to execute them properly, then songs can quickly become muddled or directionless. On Mob Justice, The Rival Mob avoids both of these potential pitfalls by delivering the late-80s Boston hardcore sound that they are known for with precision and ferocity, and consequently creating their most impressive album to date. By writing uncompromising and hostile hardcore and remaining true to their roots, The Rival Mob has shown that any hype surrounding this band is well-deserved. Pulling no punches, Mob Justice begins with "Intro Grunt", which is sure to ignite crowd violence at even the tamest live shows, and which sets the tone for this brooding and menacing album. "Mob Justice", "It Must Be Nice...", and "Life or Death" intermix speed and trudging break-downs, while vocalist Brendan Radigan venomously condemns almost anyone within earshot. The other tracks on the first half of the record, "Boot Party" and "Fake Big" are definitely album highlights for anyone who enjoys punishing riffs and sing-along choruses. In a musical landscape that often prides a macho attitude over almost anything else, hardcore is no stranger to tough guy posturing, but it is on tracks like these that the authenticity of The Rival Mob's anger and fury really come through. There are no disappointing songs to be found on the second half of this album either. Tracks like "Friendly Freaks" and "The Brutes of Force" are as hard and antagonistic as any hardcore song put out in recent memory, and they perfectly encapsulate how a band can use the late-1980s East Coast hardcore sound in new and interesting ways. "Cheapo Grosso" and "Thought Control" end this impressive endeavour without slowing down or missing a beat. In other words, there isn't a dull moment or misstep on this entire record. Bottom Line: Simply put, The Rival Mob have put out one of the most consistent and well-crafted hardcore albums of the year. Although it is only March, it is difficult to say whether anyone will be able to match the intensity, rawness, and hostility of this record. For fans of hardcore, Mob Justice is definitely a must-own.

This review is 100% positive with absolutely no negative or slightly negative comments about the album, yet it got a 9. The text is written as a 10 review, yet it inexplicably gets a 9. Seriously, get a new reviewer who knows how to f*cking use numbers. f*ck, I'll do it. Explain why it got a 9, or kill yourself.

@melody: at the end of the day, this is still an old school hardcore record. you're not going to find many of those getting a 10 on a website like this unless the record is a modern classic or is somehow groundbreaking. also the fact that the reviewer didn't find any flaws doesnt mean that it's a 10.

i remember when I met these guys for the first time, we all had sex. p.s. im a guy

this band is actually a joke. and they are terrible. enjoy being a douche and loving it.

Infamous- A reputation of the worst kind. Think the word 'famous' would have done just fine instead.

i'd rather listen to outbreak than this.

Mob Justice is such a hardcore title. These guys must be really hardcore dudes. When is their tour with MDK and

Despite my love/ hate report with lambgoat reviews, this is accurate, citing a solid group with a solid record. Get with it or get the f*ck away from it. Criticism is a luxury experianced by those on the sidelines. Shut it, soccor- moms.

"DARTHbrooks   posted 5 days ago Get with it or get the f*ck away from it. Criticism is a luxury experianced by those on the sidelines. Shut it, soccor- moms." Maybe the gayest thing I've ever read.