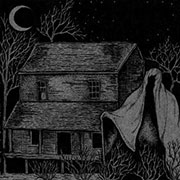 1. Bails (Of Flesh) 2. Rows (Of Endless Waves) 3. Longing (The River Of Ash) 4. Beneath The Mask 5. I Wait 6. Outro
2012 Profound Lore Records
Our score 8
by Daniel Marsicano
1/30/2013
Bell Witch's debut album Longing will never be considered a crowd pleaser; in fact, there isn't much pleasure to get out of this album. Longing beckons to the cynic in all of us, the part (whether big or small) who expects the worst out of any situation. The Seattle, Washington duo employs no guitars, using just bass and drums like a downtrodden version of Om. They get a lot out of little, and make sure to emphasize that with songs that average between 12 and 20 minutes. The album is not for those who want good vibes from their music, but will appeal to those who want raw emotion that can't be faked or forged from studio trickery. The first true test for a listener is given right from the onset, with opener "Bails (Of Flesh)." Easily the toughest song to absorb, the term "slow-burning" was designated for a track like this. It takes a good five minutes for any vocals to show up, as the band spends the first quarter of the track in a funeral doom pace. Once the screams burst out, it doesn't get any more reassuring, as the tempo hardly picks up for another 15 minutes. Not even melodic vocals help to eliminate the song's bleakness. For an album that is so rooted in the depressive style of drone/doom, there is variety in the vocal styles. There are screams and growls, but lifeless, sparse melodic tones overwhelm the harsher vocals. They are most apparent on the wonderful "Rows (Of Endless Waves)." As the bass thumps on, the vocals gain some life, ending with a 30-second extended vocal note that seems like it would go on for eternity. The song is one of the highlights from the new material on Longing. Much of the second half of Longing is material from their self-titled demo, re-recorded and rearranged. "Beneath The Mask" is a solemn instrumental featuring samples from the classic Vincent Price film "The Masque Of The Red Death." It goes a bit long, but the band feels it's good enough to repeat the same melody on the instrumental "Outro" that comes two songs after "Beneath The Mask." Placing "Beneath The Mask" in the middle of the album is an odd choice, considering that it seems better as an introduction, like it was used on their first demo. "I Wait" is still an effective, aggressive tune a year since it was first introduced on the demo. If it wasn't mentioned before, most people would not believe that all the melodies are performed by a bass guitar. Dylan Desmond makes his bass groan and sway to the well-timed drum beats from Adrian Guerra. The two have worked before in stoner rock group Lethe, and this past chemistry is integral to Bell Witch. Both musicians also share vocal duties, and this leads to intense harmonies that become exhilarating. It's not everyday an album like Longing gets covered on a site like Lambgoat, but there is a good reason to give this album attention. Very few albums released during the past year have been as melancholy as this one. For some, they want their music to be easy to swallow. Longing is nowhere near a breeze to listen to, and that will piss off much of the audience. The ones who will "get" Longing won't mind repeated plays, and will appreciate how the album pulls them in for an hour of gut-churning despair. Bottom Line: Very few albums released in 2012 are as heart-wrenching as Longing.

what is the point of attempting to review albums if they all just get an 8?

Balls (Of Flesh) Hey uh, f*ck this album. Fake emotions forged all over this shit

Good lord, this shit is boring as f*ck. I like doom, but god damn...how many times are people going to write the same songs.

One of the best doom albums of 2012! These dudes have their own sound of devastation.

Wow, one of the best records of 2012 and people complain. Complain about someone being original and different. All of you suck for the comments. This band rules, and will rule you in time! Just like Nirvana is blowing a mind right now.

this cd is legit. whoever voted this 3 stars probably only listens to terror.

the "bass only" bands that matter are: Man Is The Bastard /end