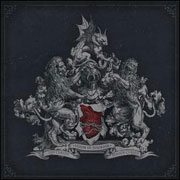 01. Loveless 02. Set to Fail 03. Blood Red Sun 04. Hard Times 05. Annihilator 06. Skullz Out (Rot in Pieces) 07. The Enemy 08. The Seventh Circle 09. New Order of Ages 10. Be Up On It 11. Heart and Soul
2012 Candlelight Records
Our score 8
by Chris Dorsey
9/24/2012
Ten years spent sitting on the bench in the hardcore/metal world can be a death sentence for a band. I'm sure plenty of V.O.D. fans were anticipating this release with at least some apprehension. Vocalist Tim Williams and guitarist Mike Kennedy's interim work with Bloodsimple in the 2000s was cringe-inducing at times. Having shared the stage during their tenure with acts like Disturbed, Korn, Otep, and Avenged Sevenfold didn't do much to bolster hopes that a reincarnated V.O.D. would sound anything like its former self. Perhaps surprisingly, the band has re-emerged more ferocious and primal than ever on The Cursed Remain Cursed. The band's move to Candlelight Records was an interesting one, considering that the label is better known for its roster of filthy Euro black metal than its hardcore leanings. Maybe some of the influence rubbed off, because Cursed is without question V.O.D.'s darkest recording to date. On the album opener, "Loveless," Williams' instantly-recognizable howling explodes over metallic snarls of guitar set at whiplash speeds that recall 1998's Imprint, with much of Cursed riding that album's same raw, unhinged vibe. The production this time around, much less polished than on 2001's From Bliss To Devastation, has a certain recklessness to it. The rhythm section is a bit muddy at times, but at the climactic moments of stand-out cuts like the punishing "Annihilator," all sounds congregate sharply into a menacing squall. Williams is a dominant force throughout Cursed. His lyrics are a stark ode to disillusionment and pain, but they rally around the notion of getting up and fighting like hell because there's simply no other option for survival. With an ability to volley between vocal styles, the lyrical moods Williams is capable of creating set the tone for every track. The shift between jagged growls and pain-laden singing is better-utilized here than on Bliss. Part of the Cursed predecessor's lukewarm reception from both fans and critics was due to the excessive employment of Williams' crooning, which sometimes smacked of melodrama and forced certain tracks into near-ballad territory. But the melodic spats are well-tempered and arranged on Cursed, making tracks like "Skullz Out (Rot in Pieces)" and "The Enemy" sound haunting rather than weepy. In its best moments, Cursed transports the listener back in time to when "metalcore" wasn't considered a derogatory term, and bands like V.O.D., Converge, and Turmoil played within that perfect intersection between the two genres. But in avoiding a simple re-hash of the past, Cursed is also littered with thrashier moments ("Set to Fail"), and as pointed to earlier, some of the record's moodier atmospherics sound roused from the glowering abysses of black metal. Despite the despondent nature of this release, the pit-worthy moments that have always made V.O.D. such a great live act remain intact. They sneak up throughout the album, and I'd be shocked if "Be Up On It" isn't on the set list for every upcoming tour stop, as it offers a fierce finger-pointing rally of "You gotta be up on it/ You gotta lean upon it/ You gotta feed upon it/ Give me some/ Give me more," with the driving stomp of Kennedy's guitar and Brendon Cohen's drums leading the charge. For the most part, the band avoids the ham-fisted chugging that plagues so much hardcore, and their songwriting has clearly tightened-up over time, as evidenced by roiling stomps like "Blood Red Sun." The final track, "Heart and Soul," closes the book with what at first appears to be a flicker of optimism, with Williams singing "Something tells me I won't be denied," before the song takes a sharp turn and ends in a fearsome flurry and the refrain "We're gonna torch this city to watch it burn." Not every note on Cursed is pitch-perfect. There are predictable moments amongst the riffage and at times you'd rather hear some of the songs continue on their own momentum instead of being stalled by seemingly-obligatory mellower passages. But Cursed should be a gratifying effort to long-time fans and a worthy addition to the band's catalogue. I was all prepared to write a somewhat apologetic, nostalgic review for a band that I cut my hardcore teeth on, but V.O.D. clearly doesn't need me or anyone else apologizing for them for this bruiser of an album. Bottom Line: Credit V.O.D. for taking such a long hiatus and coming back just as sharp and pissed-off as anyone could hope. The Cursed Remain Cursed marks a rock-solid return for the seminal metalcore act, and is a smart, sinister contribution to this year's field of extreme music.

This is pretty good. There aren't many bands that play this style anymore but I can definitely say that this is better than the generic scene-core bands that have been getting all the press lately (Attila, BMTH, Asking Alexandria, etc). On the flip side, this band will never be nearly as popular as those aforementioned band; not even close, sadly.

VOD has always been good. I bought this, and its cool.

ugh, he keeps referencing the whole album as cursed. so i just want it to be a cursed album. :(

I just got the cd and I think it's bad as f*ck.

VOD had been overhyped since like 96. they have one good song, and 4 shit records at least. they sucked then and they sucked now, like most LI 'hardcore'

If you liked "Imprint", you need to pick this up ASAP.

This is good extreme music, and I'm a huge metalhead who leans toward the extreme side. Props to so many of these reunited bands for putting out solid albums.