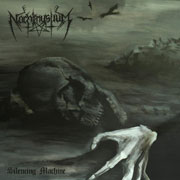 01. Dawn Over the Ruins of Jerusalem 02. Silencing Machine 03. And I Control You 04. The Lepers of Destitution 05. Borrowed Hope and Broken Dreams 06. I Wait in Hell 07. Decimation, Annihilation 08. Reduced to Ashes 09. Give Me the Grave 10. These Rooms in Which We Weep
2012 Century Media Records
Our score 7
by Daniel Marsicano
8/24/2012
Nachtmystium turned black metal on its head with the two-part Black Meddle series, which opened the Chicago act to an audience that had shied away from them. Adding in psychedelic and progressive influences had them being called the "Pink Floyd of black metal." Nachtmystium moves away from that tag with Silencing Machine. A rawer sound a la Instinct: Decay is just the start of the direction the band heads on their sixth album. Silencing Machine isn't a throwback, or a way to pacify the early fans who felt betrayed by Nachtmystium's push into other sonic avenues. Though there are some songs early on that would have been embraced on those first few albums, much of Silencing Machine is taking a dollop of everything the band has written to date. There's some of that dirty, grim black metal, along with industrial-tinged keys/effects from producer Sanford Parker. It's all integrated like clockwork into these ten tracks. While the keys gave off a bouncy, almost dance-like flavor to Addicts: Black Meddle Pt. II, they are atmospheric enhancers on Silencing Machine. That decision is a mixed one, as sometimes the effects are substantial in their employment ("The Lepers of Destitution") and then they turn around and distract from the music (the title track). Most of the time, they feel unnecessary, neither a defining quality or a bothersome extra. A song as relentless as "Silencing Machine" doesn't need a keyboard mucking up its primal rage. "Dawn Over the Ruins of Jerusalem" and the title track give off a false impression of Silencing Machine being just atonal noise. "And I Control You" and "The Lepers of Destitution" prove that theory to be on the contrary. The former has a tuneful opening and a wicked solo, while the latter has an eerie darkness built around striking organs and boisterous sampling. They aren't much in the psychedelic spectrum, though hints of Black Meddle scrap off on later tracks, like the groove buried in "Decimation, Annihilation." The slower tempos work their way on almost every song after the title track, and that could go either way for the listener, depending on what they are expecting out of the album. Having the album go almost an hour doesn't shake this opinion one way or another. Silencing Machine is the band's longest album to date, and it sure feels that way. The album drags near the final third, though "These Rooms In Which We Weep" is a solid closer that doesn't match the emotional folly of "Every Last Drop." There's little doubt that Silencing Machine is set up for success; it's about as mainstream as black metal can get without getting into Liturgy territory (and that's a discussion for another day). Blake Judd is still screeching away, the new line-up is a formable unit, and the songs are produced magnificently by Parker. The album is prime material from Nachtmystium, and can stand alongside the rest of their albums with pride; just don't expect anything as infectious as "No Funeral" or as ambitious as the "Seasick" three-parter. Bottom Line: An accumulation of the past five albums Nachtmystium has released, Silencing Machine is a strong effort that should appease fans of the band, as well as welcome back listeners who were turned off by the Black Meddle albums.

Addicts was awful, assassins had 2 or 3 good songs, this album is awesome.

a little to angry for me personally