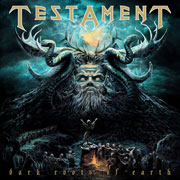 1. Rise Up 2. Native Blood 3. Dark Roots of Earch 4. True American Hate 5. A Day In The Death 6. Cold Embrace 7. Man Kills Mankind 8. Throne of Thorns 9. Last Stand for Independence
2012 Nuclear Blast Records
Our score 8
by Daniel Marsicano
8/19/2012
Testament turned heads with The Formation Of Damnation back in 2008. The band's first album in almost a decade, it was a return to thrash for a band that experimented with extreme metal in the '90s. Excitement began to build again about the band, the likes of which hadn't been heard since the late '80s. Having guitar virtuoso Alex Skolnick back in the band was another sign of better days ahead for Testament, which becomes more apparent with Dark Roots Of Earth. Time only seems to further piss off Testament, with "Rise Up" and "Last Stand For Independence" serving as prime examples. With Paul Bostaph unable to play due to a serious injury, Gene Hoglan was brought in to take over the drum stool. Having recorded with the band in the past on Demonic, Hoglan outdoes his performance on that album with a roaring energy. He even employs blast beats on a few songs, which may overwhelm avid listeners of Testament. There's little of the wonky death metal worship that was all over their '90s catalog, though vocalist Chuck Billy retains some of the aggressive streak he began to toy around with on Low. He has found the perfect medium between his old-school melodic wails and forceful barks, and usually switches between the two with no awkward transitions. His high points include the emotional outpouring on the otherwise flaccid "Cold Embrace" and the bitter tone he provides on "Man Kills Mankind." The thrash is strong with Dark Roots Of Earth, yet there is a commendable effort to provide variety that was missing from their previous album. The songs are much lengthier, including some of the longest songs the band has composed to date. This extra room is used for various solos, all of which are excellent displays of virtuosity, and fleshed-out material. The aforementioned "Cold Embrace," a ballad about three minutes too long, falls flat on its face. "Throne Of Thorns" is a better indication of how well Testament can pull off the open-ended direction. It's a slow start, but when the riffs starting piling up a minute in, the song takes a turn into the kind of areas songs like "Apocalyptic City" and "The Ritual" were immersed in back in the day. "True American Hate" has a latter-day Annihilator vibe that is easy to pick up on for those who have heard of guitarist Jeff Waters. It's not a slight against the album, but an unusual occurrence that seems entirely by accident. Many thrash bands have reunited over the past few years, some more noteworthy than others, but having Testament back in the scene chugging away is a treat. Dark Roots Of Earth has a heightened sense of danger that was only occasionally explored on their last album. Each member is at the pinnacle of their talent, and adding in Hoglan was a brilliant move. Thrash metal fans don't need to worry that The Formation Of Damnation was a fluke; Dark Roots Of Earth is proof positive that Testament is back where they belong among the top acts in the genre. Bottom Line: Testament continues to prove their thrash superiority with the excellent Dark Roots Of Earth.

Enough with this djent crap. Even Testament sounds like every record that Sumerian has put put.

^^Oh to be 16 again, you'll realize when your older you were a complete jerk, and realize how this statement is as accurate as me saying "hey, this kid has a bright future".

Souls Of Black and a touch of Low and ya got Dark Roots Of Earth...excellent! awesome production as well

seriously two people rated this a 1? I know testament's no Dance Gavin Dance, but really? This is a solid thrash metal album - bits and pieces of New Order, Practice, Souls, Low, while still keeping the shit fresh. A bit heavy on the leads, but that's to be expected. Testament is probably the best 80's thrash band still playing, hands down.

Does this sound anything like Damnation? If so, I'm going to just avoid this album.

Sorry dude but Testament was always an average at best thrash band even in their best years. Just because they are one of few 80's thrash bands still around doesn't make them any less average.

^ you've got to be kidding me. dumbass djent snob.

This album rules and so does Testament. "Average" thrash bands don't keep putting out albums 20 years after they started. the average bands were wiped away in the 80's. Skolnick solos alone make Testament one of the best bands in metal today besides the amazing riffs. take your head out of your ass and it might sound more clear to you. dumbass.

listening to this would be like me wearing a jean jacket, sleeveless, with cowboys from hell stitched on the back

you say that say testament is an average band at best, youre nothing but f*cking idiots, and i'd truly love to beat the f*cking piss out of all of you, theyve stuck to their style, unlike megadeth, and metallica, and couple other bullshit bands, testament are trailblazers, theyre amazing musicians and always, have been. people hating on testament f*ck YOURSELVES!!! f*cking gays.