A Hero A Fake The Future Again 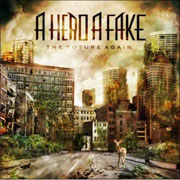 1. Mechanical Heart 2. Dead and Done 3. Port Hole 4. Wild Fires 5. The Constant 6. Wasted Miles 7. I Have A Knife 8. Princess of the Sun
2012 Victory Records
Our score 6
by Daniel Marsicano
8/9/2012
A Hero A Fake overcame the possibility of a "sophomore slump" with the strong Let Oceans Lie. Now, with that roadblock out of the way, the band continues on. Their third album, The Future Again, takes their progressive metalcore sound and scrunches it down to less than 30 minutes. The band's shortest full-length to date, they cut out any filler and set their focus upon avoiding the wandering frequently found on their first two albums. Compared to Volatile and Let Oceans Lie, The Future Again is a logical result, though not far removed from what they've been doing for the better part of a decade. The majority of the tracks on Let Oceans Lie were at least four minutes long, which makes this eight-song effort a surprise. It's almost like a mini-LP, at least judging by its length. That's not to discredit the energy and work A Hero A Fake put into The Future Again. There's still a hefty load of breakdowns and technical guitar leads that inject life into the album. The core of the band have been around since the first album, and this growing chemistry results in songs that buckle down to the essentials in a quick fashion. With a down-to-the-basic assault, "Mechanical Heart" is over and done in two-and-a-half minutes. In that time though, they use floaty synth lines, soaring clean vocals, and a lead guitar that stays ever-present for half the running length. The band obviously loves to cram many components into their brief songs, which has the tendency to come off as under-developed. Female vocals duet with the harsh screams on "The Constant," but it feels artificial and tacked on. While A Hero A Fake can't remove the metalcore tag they've stamped upon themselves, their progressive side does have its place on this album. Like Between The Buried And Me in their early days, A Hero A Fake implants smooth, atmospheric breaks into their songs. Usually, it's a snappy clean guitar/plucky bass passage that binds the heavier sides together (see "Port Hole"). Producer Jamie King gives these instances as much power as the loud cacophony that torments every detail of this record. Most of these songs are structured in such a way that their length feels natural, but a few of the later tracks do feel truncated. "I Have A Knife" transition from the stock sounds of twisted metalcore to a guitar/keyboard unison that merits rich rewards. While rewarding, it could have been something monumental with a few minutes added on. Same goes for "Wasted Miles," a short and inconsequential listen that is the closest A Hero A Fake comes to worthless material on this album. In a time when bands feel the need to pad out their albums with sordid filler, A Hero A Fake bucks the trend with an album that doesn't waste any time. It's long enough to be enjoyable without getting into that "Skipping ahead to see how long the rest of the songs are" stance. Not terribly original and similar to their past material, The Future Again will find a place in the playlists of fans of the band's previous albums. Bottom Line: To-the-point and with limited filler, The Future Again is a decent metalcore album with progressive influences.

why is this even getting reviewed?

Did victory pay you to write this?

I still only like their first EP stuff from waaaay back in the day, before Victory and all this shit. although Burden has always been a pretty good song too

this band is and always will be garbage. unless your 15 and jack off to alternative press, look forward to the mall, wake up 30 mins early just to straighten your hair. follow warped tour around your surrounding states.

f*ck this gimmick band, f*ck victory records its all trash. Oh and if you do listen to this band, and support victory records...you're just as bad, if not worse, kill yourself already.

i guess im the only one who liked this album... yes it has that generic sound that all metalcore has but if it didnt then it wouldnt be metalcore.... listen to the album for what it is, not what every other band is. if you had never herd any other band metalcore band in ur life and u herd this you would think its amazing! its just cuz all these bands wright in a drop tuning so it pretty much sounds the same. but nonetheless i loved this album. catchy as f*ck and really gets me pumped.