Bury Tomorrow The Union of Crowns 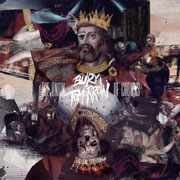 01. Redeemer 02. The Maiden 03. Lionheart 04. Message to a King 05. An Honourable Reign 06. Knight Life 07. Royal Blood 08. Bitemarks 09. Abdication of Power 10. Kingdom 11. 1603 12. Sceptres 13. Vacant Throne 14. A Curse
2012 Nuclear Blast Records
Our score 5
by Daniel Marsicano
7/26/2012
With their second album, Bury Tomorrow is looking for a spot in the big leagues of metalcore. They have Nuclear Blast Records behind them, and the experience gained from playing alongside bands like Asking Alexandria, Otep, and Attack! Attack! Their first album, 2009's Portraits, was an entry-level start for the British quintet, and The Union Of Crowns stays in this general direction. By-the-books is a nice way to describe Bury Tomorrow, as the dual vocals, meaty breakdowns, and melodic touches have been processed and scrapped out for decades. The songwriting, as well as the band themselves, has its moments, but The Union Of Crowns will be all too familiar to most listeners. Bury Tomorrow does all they can to separate from the herd in the conventional factors. The dual vocals are not the usual whiny clean vocals/flat screams of the average metalcore act. The clean vocals have a hard rock feel, and notes are hit that most metalcore singers would be jealous of. The screams ring out with anger and vigor. The songs aren't written as the aggressive verse/poppy chorus nonsense metalcore has devolved into as of late. Guitarists Mehdi Vismara and Jason Cameron get the latitude in these 14 songs to spread out, taking advantage of these situations. This is not a tour-de-force instrumentally, as the band has a stock of breakdowns they gradually dispel until they run into the main issue that ultimately drags the proceedings down. The Union Of Crowns hits the same brick wall of overcompensation that the recent Miss May I album At Heart smacked into. At almost an hour long, The Union Of Crowns just doesn't keep a quality level consistent enough to justify the length. At 35 minutes, this album could have been a major sleeper hit for metalcore. Instead, what starts as an enjoyable album descends into an excruciating grind that isn't saved by a few solid cuts near the end. In need of a serious trim, Bury Tomorrow's effort is wasted on an unsteady middle section. Take away the middle of the record, and there's quality to be discovered. "Redeemer" is an opener with a purpose, a bruising spectacle of punchy breakdowns and soaring clean vocals. "Lionheart" picks up the tempo and engages the listener in a dizzying streak of lead guitar that doesn't give until the last second has passed. "1603" incorporates a light piano melody in the intro and outro, putting the mellower side of the band on display. This side returns for "A Curse," a rock-infused anthem with a fantastic solo that goes on for almost a minute. What is disappointing is how strong the individual pieces of Bury Tomorrow are, and how they can't come together in the final product. Their sound is not what one would call "ingenious," but they have a certain forceful technique raised on primal energy. Biting off more than they can handle is a risk that doesn't pay off, and having such a "standard formula" sound doesn't help. Buying a few tracks recommended earlier in the review from iTunes or Amazon is sufficient enough to get the most value out of The Union Of Crowns. Bottom Line: Metalcore with potential, Bury Tomorrow gets too indulgent with their song selections, dragging down an otherwise decent album.

f*cking gaygs who the f*ck would actully take this band serious. miss may i , the devil wears prada, attack attack and this shit band need to meet on the interstate and f*cking crash into each other

Yet another retarded band name to forget about.

Shrapnel... You Lookin for some dick?