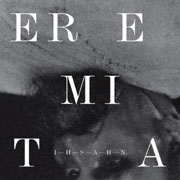 01. Arrival 02. The Paranoid 03. Introspection 04. The Eagle and the Snake 05. Catharsis 06. Something Out There 07. Grief 08. The Grave 09. Departure
2012 Candlelight Records
Our score 8
by Daniel Marsicano
6/18/2012
Since Ihsahn left Emperor over a decade ago, he has found himself in the midst of an intriguing solo career. Not satisfied with the symphonic black metal Emperor became famous for, Ihsahn has worked on incorporating other progressive influences to the point that his music can't be just labeled black metal. Eremita follows in the footsteps of the excellent After, with Shining saxophonist Jørgen Munkeby contributing again on half of the tracks. Eremita is not as grand a leap as past albums, but what it does is further lend credibility to Ihsahn as a songwriter and musician. These songs are not radically different from After, though the overall abundance of lengthy songs has been reduced. There are still a handful of 7-8 minute juggernauts, but nothing as expansive as "On The Shores" or "Undercurrent." Nothing in Ihsahn's career thus far has been as infectious as some of the songs on Eremita. Singing along to the chorus of "The Paranoid" is a good possibility after a few listens, and his vocals on "Something Out There" clash so much with the blasting black metal that it leaves a notable impression. Like After, the one element that may throw listeners off is Munkeby's presence. His improvisational style seems like a detriment to Ihsahn's sound, but he has earned a permanent place. He doesn't get as many striking leads this time around, though he heads "The Eagle And The Snake" through rough terrain with a steady hand. At first, the thought of having a saxophonist reeked of failure, but Munkeby proves to be a worthy addition to Ihsahn. While Ihsahn has had guest musicians aid him in the past, this is arguably the most star-studded lineup to date. Leprous vocalist Einar Solberg, who is a part of Ihsahn's live band, puts his soaring clean vocals to use on "Arrival." Devin Townsend also joins the vocal party on "Introspection." Guitarist Jeff Loomis pays Ihsahn back for helping out with his recent album Plains Of Oblivion by laying down a solo buffet on "The Eagle And The Snake." Though Ihsahn brings all these big guns to Eremita, it's still his baby. He handles the majority of the guitar, bass, and keyboard work, the last of which plays a large role in the latter half of the album. "Something Out There" is a blast to the Prometheus: The Discipline Of Fire & Demise-era of Emperor, with its rigid symphonic bursts and out-there tempo shifts. "Grief" is an orchestral instrumental that builds to the shrieking viciousness of "The Grave." "Departure" is an apt title for this cauldron of experimentation, from the female vocals to the sorrowful horns used near its end. Not every album has to be a massive shift in sound, and while Ihsahn fits himself into a comfortable position on Eremita, that doesn't mean he's gotten lazy. His talent and craftsmanship gracefully ballast the album's wild outbursts and melodic temper. Looking towards the past with "The Paranoid" and "Something Out There," while embracing the potential future with "The Eagle And The Snake" and "Departure," Eremita fits nicely as a sampler of Ihsahn's entire solo career. Bottom Line: An album that incorporates everything Ihsahn has done to date, Eremita is another winner that further proves his value as a solo artist.

dude is a genius and consistently churns out perfect albums.

churn is c-ck from your lips bro

This is a special moment! -FrEd DuRsT

whats this doing here? no one lambgoat likes good metal.