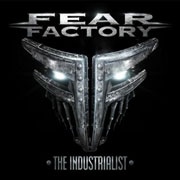 01. The Industrialist 02. Recharger 03. New Messiah 04. God Eater 05. Depraved Mind Murder 06. Virus of Faith 07. Difference Engine 08. Disassemble 09. Religion Is Flawed Because Man Is Flawed 10. Human Augmentation
2012 Candlelight Records
Our score 7
by Daniel Marsicano
6/12/2012
Fear Factory looked dead and buried with the Transgression record, but reignited and back to life with 2010's Mechanize. Featuring the return of guitarist Dino Cazares, and the first album without long-time members Raymond Herrera and Christian Olde Wolbers, Mechanize felt like a clean slate for the band. The start-stop riffs, the blasting drums (courtesy of the godly Gene Hoglan), and industrial-sounding keyboards from Rhys Fulber brought many fans back to the days of Demanufacture and Obsolete. Now they have the tall task of following up on a great comeback; enter The Industrialist, a new concept album full of science-fiction jargon and more of the same from Fear Factory. Very little has changed musically for the band between the time of Mechanize and The Industrialist. Cazares is playing the same riffs he wrote 15 years ago, which could be good or bad depending on a listener's admiration for Cazares. Vocalist Burton C. Bell bellows out harsh screams and lifeless crooning, both at the same level of quality as previous albums. Hoglan is MIA, replaced by drum programming that sounds the same as Herrera or Hoglan behind the kit. Like on Mechanize, the keyboards immerses The Industrialist into a post-apocalyptic wasteland. They can be harsh and dissonant for a spell; calm and lush for a period. Prominent keyboards have always been a defining trademark of Fear Factory's sound, and this continues on The Industrialist. The synth used on "God Eater" wouldn't have sounded out-of-place in any of the Mad Max films, and the building samples and noise used on the title track introduces listeners to the barren landscape Fear Factory have conjured up. While they aim for a moody state of despair with the keyboard-heavy tracks, the band is more simplistic in being aggressive. "Recharger" and "Dissemble" strip bare the essence of the band, both tunes tailor-made for fans who have stuck with the band since the Soul Of A New Machine days. About half of The Industrialist is more of a leveled pace, keeping the heaviness up, but laying back on the speed. The band even flirts with electronic beats early on in "Difference Engine." After starting off in such an uproarious fashion, it's discouraging how dull the last few songs are. The instrumental "Religion Is Flawed Because Man Is Flawed" has a dark tranquility (insert Dark Tranquillity joke here) with its soft piano and occasional stinging guitar riff, but the closer "Human Augmentation" is a decent concept ruined by a laborious execution. Having a stark ambient track is something the band has done well in the past ("Ascension" from Archetype being a prime example), but this is just nine minutes of non-directional torture. As a closer, it pales in comparison to the awe-inspiring "Final Exit" and "A Therapy For Pain." There have been claims that The Industrialist is this generation's Demanufacture, but there's little chance this album will create the same shockwave effect that Demanufacture did back in 1995. The Industrialist is Fear Factory doing what Fear Factory does best; chunky industrial metal, with slight melody. It's not as resourceful of an album as Mechanize was, and there isn't a song as emotionally resonant as "Final Exit" or as anthemic as "Mechanize," but The Industrialist has enough qualities to justify purchase. Bottom Line: The comeback continues for Fear Factory with a solid follow-up to Mechanize, yet one that doesn't match the stellar attributes of that album.

dino and hog-lan,. yeah they are heavy alright. which one takes the top bunk? on stage do they merge like a fat voltron? when they wake up, does it look like they are emerging from a cotton wrapped cocoon? when they eat do you have to keep a distance so nobody loses a hand or a chunk of thigh? do they drink sunny D instead of water on stage? has one of them lost a knuckle or two during dinner? album probably sounds f*cking good. just having fun

No way in hell this compares to Demanufacture (or Obsolete, which I've heard). Decent album though, better than Mechanize

I can't wait to here what they can do with Mike Heller hitting the skins. Open palm mutes are stoked.

I guess these gays didn't realize that Hot Water Music already did a song called Difference Engine that makes them look even more gay as if that was possible.

Ok, so you guys are OFFICIALLY done reviewing any good bands? Like this is last straw shit here.

been a fan since day one..but this cd is not good and definitely not better than Mechanize...I would give it a 4/10

This review is spot-on. Take it as you will. Mechanize was hard to top, but still this is pretty good. Mediocre Fear Factory is still better than Lamb Of God.

there were a few good songs on the first album and that was it. they were better as a mediocre napalm death ripoff than boring nu metal with keyboards. f*ck 'em...

sounds like dino used his riffs from the upcoming divine heresy album. ive been a huge fan of ff sice demanufacture but it sucks that they cant come up with something interesting and new!!! the same shit over and over again!!!!!! dimebag is rollin over in his grave,metal has taken a turn for the worse once again.

Still better then all the stupid death core shit bands. f*ck all the haters. Go eat a bag of micro dicks.