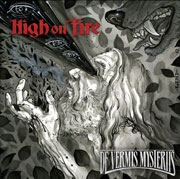 01. Serums of Liao 02. Bloody Knuckles 03. Fertile Green 04. Madness of the Architect 05. Samsara 06. Spiritual Rights 07. King of Days 08. De Vermis Mysteriis 09. Romulus and Remus 10. Warhorn
2012 MNRK Music Group
Our score 9
by Joshua
5/22/2012
Matt Pike is high on more than just fire. The man must be smoking some serious sherm at the moment, because the concept behind his band's newest opus is way fuckin' out there. Jesus Christ's stillborn twin brother's spirit has escaped the womb and is traveling the astral highway of space and time, inhabiting unsuspecting minds throughout history. Trippy. Not only does the narrative sound like product of cannabinol, opiates, and psilocybin, but the music also sounds more stoner than recent HoF outings. While there's always some sort of nodding element to many of Pike's riffs, there are more slow moments than usual on De Vermis Mysteriis. Even though the opening one-two punch of "Serums of Liao" and "Bloody Knuckles" are beefy, the barbaric chords and swinging time signatures lend heads more to swaying than to banging. Track three, "Fertile Green" finally amps up the speed, but the Sabbathy sound of "Madness of the Architect" and the swirling solos and soothing bass line of the instrumental "Samsara" bring it back to a crawl. "Spiritual Rights" however completely slaughters the stoners with an absolutely ripping combination of Pike's guitar attack and Des Kenzel's thundering drums. The slow roll of "King of Days" has some ghostly backups, contrasted by the crushing title track, and the feral snarl of "Romulus and Remus." "Warhorn" features Pike stretching the melody of his pipes. Fret not, it's still in the same gravely register fans are used to, just used to greater effect. Production-wise, Kurt Ballou did a bang up job. HoF's dirge lends itself to Ballou's signature sound; his wheelhouse, so to speak. But Ballou manages to capture the huge drums and downtuned bass along with enough treble for Pike's 9-string guitar to cut through the mix, an element lost on other HoF records. De Vermiis manages to not sound like many of the other similar-styled records coming out of the Godcity studio. Still, De Vermis is dirty. Death is This Communion and Snakes of the Divine both benefited from more majestic songwriting and pre-planned structures. De Vermis is hungrier. Nastier. A little off the cuff, and more akin to their first few releases. Most metal bands over evolve, becoming a hyper-realized and uber-technical version of their former selves. Without overtly trying to take a look in the rearview, High On Fire has crafted an album that hearkens back to some of their earlier works while still throwing in a few fun surprises. Bottom Line: Moody and menacing, High on Fire has added another superb album to their catalog.

Ah the descriptions of someone who has never touched pcp, weed, opiates, or mushrooms in their life.

HOF is an awesome band that is fresh from anything out there today,Matt Pike & Co. Aren't afraid to break the barriers. I met Matt & Jeff in London,Ontario last year & they put on a kick ass show despite Matt ailing from a bad chest cold & still had time for a nice long chat with me & signed my cd & took a pic with me & told my wife & I thank you very much for coming & drive safe,he's a class act,there isn't enough grounded rock stars like Matt anymore!

-Jesus Christ's stillborn twin brother's spirit has escaped the womb and is traveling the astral highway of space and time, inhabiting unsuspecting minds throughout history- WTF man.. This concept is totally ridiculous... Anyway Im still hoping this to be a instrumental beast

I thought that there would be no way these guys could outdo Snakes of the Divine. Thankfully, I was wrong.

album rules hof rules. You should kill yourself.