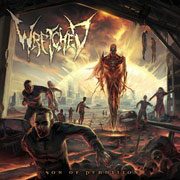 01. Oblivion 02. Imminent Growth 03. At The First Sign Of Rust 04. Dilated Disappointment 05. Repeat? The End Is Near 06. Dreams Of Chaos 07. The Stellar Sunset Of Evolution Pt. 1 (The Silence) 08. The Stellar Sunset Of Evolution Pt. 2 (The Rise) 09. The Stellar Sunset Of Evolution Pt. 3 (The Son Of Perdition) 10. Karma Accomplished 11. Decimation
2012 Victory Records
Our score 8
by Daniel Marsicano
4/19/2012
Wretched have released three albums since 2009, yet they hover low under the scope of most listeners. It's hard to see why that is, once any of their albums are played through. Their death metal sound has bits of technical musicianship in there, and they don't clone out a row of generic tunes with shameless breakdowns and lifeless riffs. Melody is not a tainted word to Wretched, and their penchant for lengthy instrumentals is one of their trademarks. All of these factors play a hand in the band's third album, Son of Perdition. Trading off the vicious death metal with subdued melody on "Imminent Growth" and "Repeat...The End Is Near," Wretched fuses and transitions these styles with no hitches or abrupt distractions. The latter is a display of technical mastery that breaks down into a spotlight for drummer Marshall Wieczorek. Meanwhile, if someone wanted to get an all-encompassing taste of what the band offers on Son of Perdition, the capable "Dreams Of Chaos" is a solid example. That's not to say the band doesn't drop the calmer sections in favor of being loud and brutal. "Dilated Disappointment" is a scorching two minutes of fury, punctuated by powerful screams from new vocalist Adam Cody. "Karma Accomplished" jumps the album back into force after a few low-key tracks, which turns feedback and calculated drum fills into a rousing uptempo anthem. Most of the songs have so many elements running through them that it's appropriate to have a few tracks whose apparent objective is to be relentless. There will be a select audience who are perplexed by the abundance of instrumentals, but they are not throwaway tracks. The three-part "The Stellar Sunset of Evolution" is a significant highlight to Son of Perdition, as the band embarks on an eight-and-a-half minute journey with no vocals to tell the story. The first part has an eerie calm, setting up the upbeat second part, finishing up with a suffocating gallop fading into darkness on the third part. In between, acoustic guitars, soaring leads, and a tension-filled atmosphere build upon the majestic aura to the instrumental. Son of Perdition maintains its consistency nearly all the way through, waiting until the end to stumble with the underwhelming "Decimation." Wretched is able to write technical melodic death metal without sounding like the bastard spawn of The Faceless and Between The Buried And Me. They stand of their own accord, away from mindless comparisons. The dynamics between the heavy-hitting rhythms and soulful, clean interludes are given equal space, and Wretched does this by not compromising with whiny vocals or cheesy keyboards. Son of Perdition is a fantastic release that should elevate Wretched to the upper tier of contemporary metal acts. Bottom line: A resourceful and gripping melodic death metal record with bits of technical playing, along with one of the most expansive instrumentals released so far this year.

Great album. My only complaint is the 3 instrumentals. Don't get me wrong, the music on these tracks is great, it just needs vocals to give a narrative. Also, they have a great death vocalist of well-known reputation and his talents were completely unused in those tracks which is a bummer. Also, there is no reason for the 3 tracks to be separate when it is all just one song really. I guess they just want to rack up more individual track sales on iTunes?

^^ you f*cking moron. Call up tony brummel at victory and see if you can get an internship in the "business" disvision. Oh and splitting up songs is a f*ck of a lot better than btbaming the shit out of your album and keeping the number of songs low and minutes high for the sake of art. God, you're such a pssy.

The instrumentals are always great to hear from this band, however, they recruited Adam f*cking Cody from Glass Casket. I remember seeing these guys with Rapture Cabaret. Who is also floating low under the radar and their album, "Gates of Domination" is one of the most awarded albums last year and this year on Ourstage.com. Hell they got over 10,000 votes on one track alone. Definitely check out more of Wretched and if you got time, give Rapture Cabaret a listen as well!

Rapture Cabaret...wasnt josh wingo in this shitty band and then kicked out due to you gays being massive gays? also, wretched is ok, BUT some of their "friends" in my area are pretty much scumbags and borderline date rapist scene bros. fight me you white trash w/ tight pants and shitty haircuts. thanks.

look at all these people who care about this bullshit

Brassknucks is mad his sister got banged by those dudes.

Hey Brass Knuckles, f*ck off. Who are these so called people you are talking about?