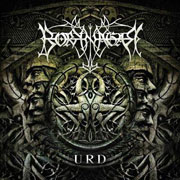 01. Epochalypse 02. Roots 03. The Beauty of Dead Cities 04. The Earthling 05. The Plains of Memories 06. Mount Regency 07. Frrostrite 08. The Winter Eclipse 09. In a Deeper World
2012 Century Media Records
Our score 7
by Daniel Marsicano
4/12/2012
Borknagar have always challenged the sacred rules of black metal, not being forced into the bleak gloominess of their peers. They were kings of atmosphere, using keyboards and ambient passages to put across a breezy otherworldly feel to their music. The tremolo-picked riffs and raspy growls were present too, but the band was at their high point when breaking away from those conventions. Not slowing down a bit since their eponymous debut was released in 1996, Borknagar push further into a progressive style on their ninth album, Urd. Two cymbal crashes are an unassuming start to the stunning opener "Epochalypse," where recently departed drummer David Kinkade plays with a vigor replicated by his work on Soulfly’s Enslaved album. The song sucks the listener into a landscape of cities of deathly slumber and snow-covered woodlands, which Borknagar guides us through over the span of nine tracks. No matter how pushy the band gets, there’s always a soothing break at some point to let the listener take in the atmospheric touches. The band have no qualms about going into lengthy diatribes, with the majestic "The Winter Eclipse" landing close to double-digits. However, some of Urd’s best moments are when the band drops the black metal mask and shortens things down to something more radio-friendly. "The Beauty Of Dead Cities" rocks with a ‘70s flair, and "Frostrite" spins a yarn about a magnificent walk in a frozen tundra. "The Plains Of Memories" is keyboardist Lars A. Nedland’s playground, where lush pianos mingle with acoustics and a low-key pace. There was plenty of press given to the full-time return of bassist/vocalist ICS Vortex, who guested on the closing track to Universal, "My Domain." Those who wondered how Vortex would collaborate with Vintersorg, who took Vortex’s place in 2000 as lead vocalist, will be relieved on how well the pair functions. Both trade-off lead vocals, though the clean vocals have an increased presence due to Vortex’s involvement. When Nedland chimes in, the three of them harmonizing is a pleasant surprise. Fans who like to shell out extra dough for the limited edition digipack will find two bonus tracks, "Age Of Creation" and the Metallica cover "My Friend Of Misery." The former is a tuneful anthem that could have fit on the regular edition with ease, while the latter was originally on a tribute album to Metallica’s The Black Album released last year by Metal Hammer magazine. It’s not a direct copy of the original, and takes advantage of the multiple vocalists and keys to put a new twist on an underrated song. Urd is not as immediate as Universal was, but Borknagar show no compromise in expanding the melodic template set up on Universal. The new lineup seems to invigorate the rest of the members, and while these songs aren’t direct, they have more replay value. The songwriting continues to reflect the evolution of Borknagar over the past decade, and at this point, they have found comfort in being a stellar progressive black metal group. Bottom line: Though not as impactful as Universal, Urd continues Borknagar’s long streak of quality progressive black metal album.

i stopped reading when you said "soulfly". nobody should have those credits included on anything done be everyone. you are now my enemy