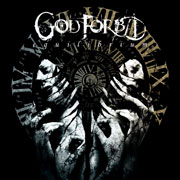 01. Don't Tell Me What To Dream 02. My Rebirth 03. A Few Good Men 04. Scraping The Walls 05. Conquer 06. Equilibrium 07. Overcome 08. Cornered 09. This Is Who I Am 10. Move On 11. Pages 12. Awakening 13. Where We Come From
2012 Victory Records
Our score 7
by Daniel Marsicano
4/4/2012
When God Forbid’s fifth album Earthsblood came out in 2009, they seemed to be at a creative high as a group. The songs were expansive and full of nuances showing maturity as songwriters, and signaled the next evolutional step that started with the jaw-dropping IV: Constitution Of Treason. That was when things got interesting, and not in a good way. Guitarist/vocalist Dallas Coyle departed, the first major line-up change in the band’s history. The band also left long-time label Century Media. To fix these issues, God Forbid bought in ex-Himsa guitarist Matt Wicklund to replace Coyle, and signed with Victory Records. All of these circumstances give Equilibrium a feeling of a reinvention. Don’t confuse that for a gigantic shift; there is no mistaking this is God Forbid, with vocalist Byron Davis screaming away and the band staying somewhere in the vein of metalcore and thrash. Losing Dallas affects the clean vocals, as his brother Doc is left to do most of the clean singing on his own. He does fine, leaving an impression on the choruses to “Scraping The Walls” and the title track, but the missing harmonies between the brothers was one of the integral parts of past albums. There were murmurs in the Internet community when “Don’t Tell Me What To Dream” was first released. People were in fear that God Forbid had gone “djent,” jumping on the bandwagon and leaving a decade of work in the dust. Those worries are for naught, as the next song “My Rebirth” jumps into familiar surroundings. It has the rough, yet melodic, tempers that won God Forbid a legion of followers over the years. Those who favor the band’s aggressive side will be floored by the blast beats on “Pages” and the wicked harmonic guitar leads on closer “Where We Come From.” Earthsblood treaded on progressive songwriting, with half the songs over six minutes each. That trait is scaled back on Equilibrium, with the mission being concise and immediate songs. In that sense, God Forbid accomplishes this goal. They have been getting better on every album at fusing melody without settling down the anger and bile, and that continues on Equilibrium. “Move On” is a premier showing of the duality of their sound, while the title track strips away the dissonance for a pace that would constitute a ballad in most circles, though without the blatant cheesiness. God Forbid have been smart at keeping the filler to a minimum, but they hit a cold streak on Equilibrium. With 13 songs - the most on any of their albums to date - there is a greater chance of a flat tune, and this album has a few of them. The instrumental “Awakening” is more dull than insightful, a trait that can be passed on to “A Few Good Men.” It’s hard to find anything on Equilibrium as poignant as the piano outro to “The Lonely Dead,” or as monumental as the soaring guitar solo on “Walk Alone.” Speaking of guitars, Doc Coyle and Wicklund don’t disappoint, but haven’t earned that spark of chemistry the Coyle brothers always had. For all the press the shake-ups in the band got, they never flinched or backed away from persevering and attempting to live up to the previous five albums. While Equilibrium is not able to match the quality set starting with 2004’s Gone Forever, there should be a consensus of approval from fans. Bottom line: Major shake-ups in the band do little to buckle the momentum of God Forbid. Equilibrium is a solid effort, though not up to par of the previous few releases.

God forbid you guys not write long-winded, pointless reviews just to tell me an album is mediocre.

^ holy shit, did you trip and fall when some english got thrown in front of you? zip up your pants your retard is showing

The funny thing about this review and the responses by the peanut gallery so far is that I think this is my favorite album by God Forbid yet and I think it is the best straight forward metal album of the year so far. The title track is now my all time favorite GF song.

Tony Victory here. I'm in a skinhead crew, just remember that guys when you leave negative comments about my bands.

Wow can't believe someone would have the audacity to post as me. Do I really need to break out the elbow tattoo? I really am in a skinhead gangland crew. Never forget Raybeez!! or something of that nature.

God Forbid you review a good band for once, Lambgoat.

At The Gates rip off.