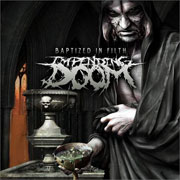 01. Murderer 02. For The Wicked 03. Chaos: Reborn 04. Deceiver 05. Falling Away 06. Absolute Horror 07. Angry Letters To God 08. Baptized In Filth 09. My Light Unseen 10. Death. Ascension. Resurrection
2012 MNRK Music Group
Our score 6
by Daniel Marsicano
3/12/2012
Reviewing the new Impending Doom album on this site is just asking for trouble. It’s no secret that their deathcore style throws many traditionalists off, and being openly Christian gets them obscene levels of scorn. They are a band that is either adored or disdained; very little middle-ground can be found, and Baptized in Filth won’t change the balance of those opinions either way. It’s a vicious bombardment of chugging breakdowns and tuneless screaming that’s been worked on during the past three albums. Baptized in Filth is for the core group of people who found something compelling about the band back in 2007 with Nailed. Dead. Risen. Impending Doom have been handling themselves with poise since their debut, considering the nonstop backlash that has been dumped on them from every angle. Each album has been pulling into a sound that retains the aggression, but integrates the tight chemistry the four-piece possesses after years of live shows and band rehearsals. There’s not much the band does besides blasting away and twisting an angry, yet hopeful, message behind their lyrics. “Murderer” is a decent opener, as the foursome throw down an obvious live anthem for their next few rounds of touring. Most of the first half of Baptized in Filth keeps to a similar formula, though the rhythm section gets their moment on the compelling slow-paced introduction to “Deceiver.” Cory Johnson is the lone guitarist, and makes the best of it with a few slamming breakdowns and riffs that trade in complexity for memorable simplicity. “My Light Unseen” will be the song that will drive many over the edge. Be prepared for clean singing and melodic guitars, which may have the elitists raising their brows and groaning in waves. It’s not for the whole song, but it definitely screams, “Mainstream, respect us!” At least it’s a break from the painful-on-the-ears screaming and hardcore posturing Brook Reeves has grown into. He has made improvement in clarity of the words he’s preaching, but it won’t be confused for a master performance. Reeves fits the music, and doesn’t outright offend with his harsh style. That can be relayed back to the entire album as a whole, as Baptized in Filth is inoffensive deathcore that delivers exactly what a fan of Impending Doom would expect. It’s heavy, perfect for their fans to do weird karate moves and flare around like seizure-induced monkeys to, and doesn’t stray from the band’s roots. Haters of the band won’t be swayed by the album, and life will continue on with the stereotypical bashing playing out in the comment section below. Bottom line: Baptized in Filth will have Impending Doom fans left satisfied, but haters will keep on hating at the band’s religious affiliation and conventional deathcore sound.

I just played about three seconds of that clip. My cat lifted her head, looked a me, and went back to sleep.

im NOT crying about this regurgitated tripe, i cut an onion

*siiiiiiiiggggggghhhhhhhhh * man atleast job for a cowboy is trying to be death metal....(no i am not backing them up) just saying..you could atleast TRY

it's funny because there's no god

tl;dr version: "...chugging breakdowns and tuneless screaming..." There, I saved 2 minutes of your time.

It's funny to see the quality of comments you get when you don't have to use your Facebook account. Internet tough guy gays. Nothing new, if you liked them before you still will. Other wise listen to the band "anonymous" is in, I'm sure it's AWESOME!!!

Thought they would have crossed over to actual death metal by now, Owell

I agree with anonymous, Impending Doom IS stoked!

this review reminds me that I have an Impending Dook... time to shit, brah! <3 Jebus!

this band is f*cking awful, mixing christianity with any form of death metal just isn't right. Take your jesus and scene trash else where, you make shitty music that isn't worth a second listen. f*ck god f*ck organized religion, f*ck this band. Why lambgoat, why did you have to review this f*cking album instead of a new release by a band any of us care about. STOP REVIEWING BANDS NO ONE WANTS TO READ ABOUT.

even the album cover reeks of homosexuality, these guys are total gays. One of them use to date a friend of mine's sister and he supposedly was waiting for marriage and would only fingerpop while wearing surgical gloves. what a gay, he needs to get with the prog bro and get some red blood chips under his nails like he has been eating pasta. that's what I said to the queer beer.

review the new Undergang, Pallbearer, or Horrendous... all three are better played on mute than Impending Doom @ full blast.

who cares what their lyrical content is, all death metal lyrics suck balls. they just suck musically, so stop it sisters of the night

Daniel Marsicano is a total gay, plain and simple just the way he likes his mojitos.

defacation is next to godliness

eat a satchel of dicks gayggggg. see you bros on the powerade stage at the monster crunk joose loko slaying manslaughter sleighfest this summer, broooooo!

This album is great, granted it's not their best, but still good. It's unfortunate that so many people get caught up in the fact that DOOM believes in God so they just push their music aside. There are some sick lyrics in their albums if you actually look.

although i love impending doom, this review is spot on.

...you're anonymous. I don't understand.

shut the f*ck up burn face, you have x's in your name still... it's 2012 you f*cking idiot. shove c-ck into your ass at mass quanities until they tickle the back of your teeth, shit dick gay

you guys are all a bunch of c-ck-touching gays

6 is double what I would have rated this t-t dirt.

6? too much score for this shitty album.

what's even more amazing are the f*cking dumb-asses who are willing to fund this shit with another album (and possibly tour support). people complain about the record industry failing, yet more Impending Doom albums get released. *shrugs*

I like Impending Doom but the clean vocals really does scream mainstream and I presonally love Metal becuase its SUPPOSED to be different.