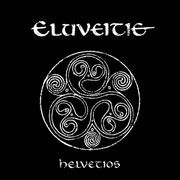 01. Prologue 02. Helvetios 03. Luxtos 04. Home 05. Santonian Shores 06. Scorched Earth 07. Meet The Enemy 08. Neverland 09. A Rose For Epona 10. Havoc 11. The Uprising 12. Hope 13. The Siege 14. Alesia 15. Tullianum 16. Uxellodunon 17. Epilogue
2012 Nuclear Blast Records
Our score 8
by David Keevill
3/8/2012
The Eluveitie experience is quite unlike any other band that falls within the folk metal bracket. Their music, soaked in the mead and blood of proto-Celtic tribalism has become second nature to the down-tuned metal riffs and the harsh male vocals that are the bedrock of Eluveitie’s sound. With Helvetios, a concept based around the Celtic tribe of the same name, Eluveitie once again surrounds themselves in the blackened metallic stomp and swirling folkish melodies that have become so identifiably their own. Where Helvetios really starts to step out of the dark ages is in Eluveitie’s ability to tell a tale through their music. Following the course of the Helvetii tribe’s interactions with the invading Roman armies, it’s an album littered with devastation, despair and also hope born from fervent optimism. The music roils and explodes to match the peaks and troughs of the tale of this doomed people, whilst the album is framed by fitting spoken epitaphs. The title track, for example, is carried along at a blistering pace, asserting the nature and freedom of the tribe which quickly moves into the stomp of "Luxtos" and its similarly themed lyrics, ‘Emmos snis riyi emmos snis andometi’ (‘We are free and we are untamed’). The emotional intensity of this album is expressed through its diversity. For all the frenzied nods to black metal and bleeding fret marks left on shredded fingers, there are also moments rich with sadness, achieving a level of immersion into this concept that very few other bands achieve. This is no mean feat, considering the kind of comedic reception that bands bordering on the ‘folk metal’ genre often receive. "A Rose for Epona" for example, utilises the soaring clean female vocals of Anna Murphy and bears the condemnation of a woman cast from her homeland because of war. This bleeds into the brutal "Havoc," one the album’s highlights and a full-tilt mobilisation of all of Eluveitie’s strengths; gutter-tuned guitars overlaid by rapid flute blasts and Chrigel Glanzmann’s growling menace. Comparing Helvetios to 2008’s lauded Slania, it’s easy to see how Eluveitie have grown as a band. The sense of cohesion with the record is huge; instrumental filler tracks like "Hope" and the outro piece are dense with tradition and genuinely feel part of the Helvetii’s honourable end at the hands of the Romans. The urge to overwork a record like this must be tantalising and Eluveitie only very occasionally fall into this trap; "Scorched Earth" becomes grating as it enters its fourth minute of chants. Bottom line: The elements of Eluveitie’s music that form the ‘metal’ part of their sound are not innovative, nor especially exhilarating. However, looking at this in isolation completely destroys the point of Eluveitie and will especially mar your view of Helvetios; this is an album that captures the band at its most convincing, and it's eternally to their credit that they’ve used such a beautiful and bleak concept at the heart of this record, and pulled it off so credibly.

this is the gayest shit i've ever heard. f*ck this review and folk metal.

This album is amazing great damn band, and you 2 dumb f*cks below me can blow me!!! Madball? Go somewhere with pssy old ass hardcore stupid f*cking idiot!!! Campos out!!! Great review.

Scene kids are too insecure about their penis size to enjoy anything folk.

good stuff and f*ck madball and just about all hardcore