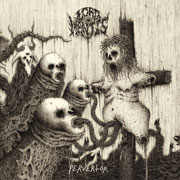 01. Perverter of the Will 02. Septichrist 03. Vile Divinity 04. Levia 05. Ritual Killer 06. At the Mouth 07. The Whip and the Body
2012 Candlelight Records
Our score 9
by Nick
2/26/2012
Many of us have been previously impressed by Lord Mantis. Their grimy, full-tilt brand of blackened sludge on 2009’s Spawning the Nephilim helped establish the bar for what qualifies as exceptional in a period where black metal influence is all the rage. Just like when elements of the Gothenburg death metal sound steadily crept into heavy music in the late ‘90s and early ‘00s, a decade later finds us witnessing the less-than-subtle arrival of repetitive blasts, screeching mid-range guitar progressions, and tortured screams in everything from hardcore to sludge and post-metal. Luckily, Lord Mantis’ follow-on, Pervertor, still maintains that high level of excellence, despite clearly punching in as a continued member in the blackened crowd. Digression aside, the work presented here is still sludge at its core. The evilness that reigned supreme on Spawning the Nephilim is out in full force, though the abrasiveness has been toned down ever so slightly in favor of more creative guitar interplay, greater warmth in the ubiquitous distortion, and ambitiously sweeping song structures. Opener “Perverter of the Will” soon displays that layering of a second guitar’s worth of eerie melody over a wickedly churning main riff. When mixed with the even more reverb-drenched howls (as well as a few well placed gutturals), the results are as hard-hitting as before, but more hypnotic. “Vile Divinity” proves that the band isn’t as strongly married to low-end riffing, as an onslaught of nimble mid-range fretboard work ushers the track into and out of its six and half minute journey. Yet it is the pair of offerings in “Levina” and “Ritual Killer” that truly define this disc. The former has a straightforward formula -- one part dirge, one part agitated low-end riffing plus a touch of noisy harmonics -- but it captures a sinister mood with perfection. It's a testimony that it is possible to be hellishly ethereal without fully swinging to the bleak and sparse end of the spectrum. The latter is the record’s epic at over nine minutes, but again, doesn’t rely on empty space or slowed development to achieve its grand impact. Instead, it is a mid-paced riff fest, with the intro’s offering closely resembling the earlier, darker days of Floor and the 3:20 mark unveiling one hell of an earthmover. “At the Mouth” and “The Whip and the Body” close out Pervertor with a more blackened beast raising its head. The aforementioned elements of the creeping black metal influence are front and center, though there is no sense of misuse; the dynamic shift is perfectly executed after the steady bludgeoning of “Levina” and “Ritual Killer.” Bottom Line: Lord Mantis’ malevolent sludge is here to stay and will easily earn a spot amongst extreme music’s blackened favorites. Rarely do we get the pleasure of hearing something that is as driving and tonally heavy, yet as eerily mesmerizing in its broad song structures. Pervertor is without a doubt Lord Mantis’ best offering to date and certainly ups the ante for 2012.

"...in a period where black metal influence is all the rage." yeah, because they weren't in Nachtmystium or anything.

First LG review that's on time/ahead of the pack.

Sludge is stupid and takes no talent. f*ck this boring shot

anonymous posted 2 days ago Sludge is stupid and takes no talent. f*ck this boring shot so you can't even post right. go f*ck yourself, idiot.

Hey save for at a mouth & ritual killer this is a total disappointment. LG lied to me.