Everything Went Black Cycles of Light 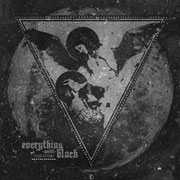 1. XI 2. Gods of Atlantis 3. Halo of Vultures 4. Lifeless 5. Parades 6. Thorn Feeders 7. Amongst Wolves 8. Kingdoms 9. Baptists
2012 Prosthetic Records
Our score 7
by Brian Shultz
2/15/2012
Everything Went Black is a bit of an anomaly for the normally metal-centric Prosthetic Records. Ostensibly, the St. Louis act is a hardcore band—the tip-off being that their name is a sure homage to the Black Flag compilation of the same name. Still, one knows that when Prosthetic dabbles in more "standard" (albeit still metallic) hardcore fare, there are good times to be had by all, from Trap Them to Unholy. Everything Went Black's debut full-length, Cycles of Light, will no doubt satisfy this camp of followers. Cycles of Light makes its pay on blackened, mid-tempo hardcore with a steady succession of head-banging riffs, scratchy growls and smokey, prowling buildups. Song lengths range from just over a minute long to more than five minutes, and that speaks well to the band's compositional diversity. They maintain a definite sound and consistent, harsh tone, but clearly attempt to instill songs with identity. The bridge in "Kingdoms" is an excellently ominous crescendo of gloomy energy, while "Parades" even ends with a swelling string section. This is a bit like a more straightforward interpretation of November Coming Fire's underrated Dungeness: Think burly, thick metallic hardcore stomps without any shoehorned mosh parts ("Halo of Vultures," "Kingdoms"), with some faster tempos mixed in here and there ("Thorn Feeders," "Baptists"). The Hope Conspiracy is probably a reliable reference point as well. Granted, Everything Went Black actually seem overall less brutal, and respectively come up a bit short in the hooks and dynamics departments. Speaking of hellish Massachusetts hardcore, though, some Kurt Ballou-esque guitar wailing bleeds through occasionally, and there's nothing really wrong with that. Bottom Line: Cycles of Light is a solid rager. Prosthetic's hardcore releases are few and far between, but when they unleash one they don't fuck around, and neither does Everything Went Black, thankfully.

The old Everything Went Black from the NW>

thought it was pretty boring

Great band, great guys. This record holds it down.

m00k, f*ck YES! I saw them on Halloween once with Trial and the place absolutely went ape shit. What a great band!

Regardless of what you guys say, this album is a milestone for a hard working band. They deserve support on it, and if you saw the crowd reaction at home, you'd understand how hard they work within the scene and the amount of effort they've put forth to be where they are. And this album rips. Go see them live and all of your negative comments will be null. -Brown

I would if their tours went further than a city block

I dig this band for what it is. I don't get the whole "crust" label that bands like this are associated with. That's like calling The Used screamo. You d-bag new jack hardcore kids need a history lesson. The Hope Con comment is pretty accurate. Bottom line - This is a fair and accurate review. Wish this band the best.

shitty album,shitty band a bunch of whiny lamb of god loving hardcore wannabe douchebags save your money for a better band

Good Band, Good Musicians. It is always a fun time to see them live. LOL at the lamb of god comments. -gabe.

Know what would be really awesome. If they didn't use the name of Seattles Hardcore band Everything Went Black that was playing shows over ten years ago. Oh and if they also hadn't ripped off the same bands logo. Way to be original guys.

one more damn band with "Black" in their name. How unoriginal can we get? Hey, let's name our next song "Blacker than the blackest blackened black" or some crap like that. From this point forward, if you have "black" in yor band name, I will not listen: you have already proven your lack of ingenuity.