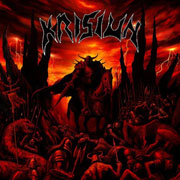 01. The Will To Potency 02. Blood Of Lions 03. The Great Execution 04. Descending Abomination 05. The Extremist 06. The Sword Of Orion 07. Violentia Gladiatore 08. Rise And Confront 09. Extincao Em Massa 10. Shadows Of Betrayal
2011 Century Media Records
Our score 8
by Brian Krasman
12/19/2011
Brazilian death and thrash metal often are linked to Sepultura, that land’s best-known, most successful band. But haven’t they done enough to sully their reputation by now? Andreas Kisser, what are you thinking? Maybe it’s time Brazil’s rightful torch-bearer be recognized as Krisiun, a band that has a pretty solid catalog and never got into the foolishness that helped derail the band that, admittedly, heavily influenced their sound. Krisiun are back with their eighth record The Great Execution, another helping of speedy thrash and skull-crushing death metal that should please longtime fans of the band. This could be deemed a negative by some, but Krisiun never really go too far off the script. Listeners familiar with the band likely know what to expect when a new album drops, and if there are no qualms over the group rarely taking chances, then it’s tough to be disappointed by Krisiun’s output. You can be assured you’re going to be devastated and get something that would sound just fine in a metal mix alongside bands such as Kreator, Slayer, Morbid Angel and, yeah, Sepultura. Not everyone can be (nor wants to be) an innovator, and sometimes it’s just nice to know you won’t be disappointed. The album’s Toshihiro Egawa-created artwork should draw people in who buy their records based solely on brutal covers. A horse-bound assassin rides among a sea of troops and skulls, all awash in red. It’s the perfect representation of what you’ll hear when you press play. Tales of war, blasphemy and pestilence, all Krisiun go-to topics, are here in all their flesh-mangled glory, and bassist Alex Kamargo’s growls and shouts sound as effective and furious as ever. His brothers, guitarist Moyses Kolesne and drummer Max Kolesne, help contribute more noise and thunder than three men should be able to create. The record rips open with “The Will to Potency,” a song with some brief acoustic flourishes before it launches into death madness. That leads toward “Blood of Lions,” a burly, muscle-bound masher where Kamargo howls, “I fear no one,” as demolishing double-kick drums and tasty thrash riffing erupt; the title track has guitar work that would make Kerry King and Jeff Hanneman smile; “The Extremist” has some breakdown sections that move dangerously close to hardcore, but the song also contains lead lines that sound plucked from the power metal realm; “Violentia Gladiatore” glorifies butchery and bloodshed, and the tempo is neck-jarring; and “Extinção em Massa” is sung in their native tongue by guest Joao Gordo, of Brazilian punk band RxDxPx, and it stands out gloriously as the oddball track on the record. Krisiun show no signs of stopping, and eight records into their career, they’re as potent as ever. The Great Execution proves this point and stands as another strong entry in an already molten collection. Bottom Line: There’s nothing terribly new on The Great Execution, but that’s OK. It’s a strong album from a reliable band that certainly has not softened with age.

at first I was disappointed by this album because it's slower than their other albums. but after a few listens it grew on me, and i enjoy the contrast between the tamer sections and the over-the-top sections. now i appreciate this albums unique place in their catalog.

wheres the dick at around here?

eh...as far as metal goes ive been disapointed. new morbid angel should have owned the f*ck out of everything..wrong. new origin was great though. new gorguts will destroy everything in metal though. unless immolation or hate eternal put out something new