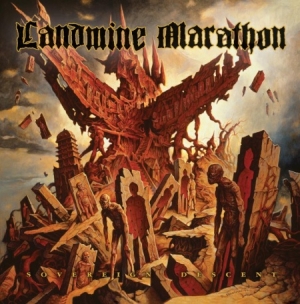 01. Exist 02. Shadows Fed to Tyrants 03. Foul Revolt 04. Cruel Policy 05. Justify the Suffering 06. Steadfast Hate 07. Chained by the Same Fate 08. Flood the Earth 09. Rise with the Tide
2010 Prosthetic Records
Our score 8
by Nick
3/16/2010
For those already familiar with Landmine Marathon, the band's latest record, Sovereign Descent, is exactly what you'd expect. Classic death metal/grindcore influences from Bolt Thrower, Carcass, and Napalm Death? Check. Absolutely ferocious screams from arguably metal's most up and coming frontwoman? Check. Just enough of a crust punk/hardcore mentality to keep each track pumping at a blistering pace? Check. What's not to like? To be frank, this record is almost a carbon copy of their previous, Rusted Eyes Awake. Some might call this a negative, but in the context of Landmine Marathon's pummeling style of death metal any major digression would be a step away from the band's proven strengths. But spend a little more time with the album and differences between records will begin to surface. You'll notice an abundance of small touches, which when combined, produce a record exhibiting a sound that has been meticulously fine-tuned, inching closer and closer to the output of the aforementioned metal and grindcore greats in the process. Two of these touches stand out: Improvement Number One: This is by far the band's cleanest recording, sporting a beefier sound characterized by thicker low-end. The crisp production affords great versatility and is equally kind to fast, monolithic chord progressions, harmonized leads, and dive-bombing soloing. Improvement Number Two: There is a level of tightness in instrumentation achieved here that inches the band one step closer to perfection. Granted, Landmine Marathon has always been tight on record, but everything here is so precise that the grooves presented sound just that much more monstrous. And finally, I can't sing enough praise for the roughly four minutes of dirge-y excellence delivered in the first half of "Steadfast Hate." Much like "Xenocide" from Rusted Eyes Awake, the song absolutely destroys by locking into a steady, down-tempo pace. Ominous leads and double-bass heavy drums still play a major part here -- but when they're at such a slow tempo, they're exponentially more haunting. Eventually the track picks up pace, returning to a format closer to that of its peers, but the damage has been done. This is some wonderfully crushing stuff. Bottom Line: This has been done before and it has been done well before. But that doesn't change the fact that Landmine Marathon's Sovereign Descent is both the band's most accomplished record to date and a shining example of Bolt Thrower, Carcass, and Napalm Death worship done right. I've said it before and I'll say it again: Landmine Marathon moves pretty fast. If you don't stop and listen once in a while, you could miss them.

I hate these f*cking reviews so much.

solution - don't read them then

The favorite track is not listed in the track listing?

Hi, my name is Nick. You all know me as the most retarded reviewer on Lambgoat. You also might notice that I pick the bands album title as my favorite track not realizing that there's no song by this actual title. Doh! One of these days I'll get my thumb out of my rear and realize what it is I'm doing here. Until then, please work with me. I'm slow and I'm still a growing boy. One of these days I'll get it right.

Can't believe i bought this. After about 3 tracks of the same song, i get enraged and curse everyone who hyped this band/release.