Crime In Stereo I Was Trying To Describe You To Someone 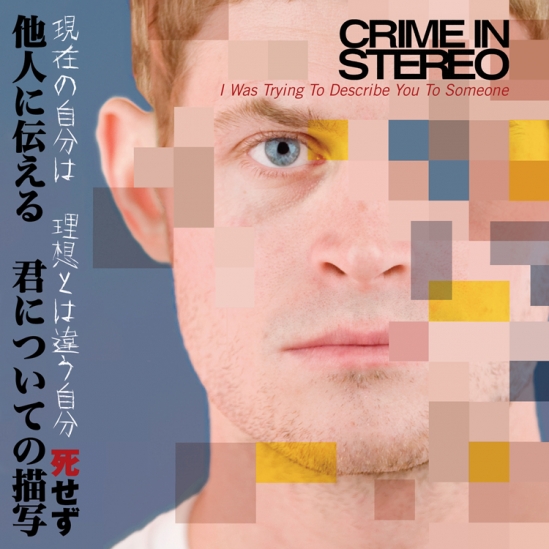 01. Queue Moderns 02. Drugwolf 03. Exit Halo 04. Not Dead 05. Odalisque 06. Young 07. Type One 08. Republica 09. I Am Everything I Am Not 10. Dark Island City 11. I Cannot Answer You Tonight
2010 Bridge Nine Records
Our score 7
by Nick
3/5/2010
The transformation is complete. Six or seven years ago, when Crime in Stereo was just getting out of the starting gates, the Long Island group's sound stuck to the rubric of short, fast, and catchy hardcore -- something along the lines of a successful mix of Lifetime's mentality and Grade's youthful energy. 2007's ...Is Dead saw a shift toward including a generous helping of the rock stylings of modern day Brand New, both in instrumentation and in vocalist Kristian Hallbert's adoption of that strained-but-still-melodic singing trick. And with I Was Trying to Describe You to Someone, the final step of musical progression has been checked off; this is Brand New, Jr. on our hands, folks. But that's far from a bad thing. I, like many listeners in their mid-20s, was a loyal fan of Your Favorite Weapon when it was released nearly a decade ago, so I'll openly allow my impression to be clouded by small pangs of nostalgia. Additionally, the fact that this record eclipses Brand New's recent album attempt in quality certainly doesn't hurt either. In running through the eleven tracks of I Was Trying to Describe You to Someone, it's hard not to compile a list of cleverly executed and downright memorable songwriting moments. "Republica" opens with that same subdued vocals and kick-drum combination that gave ...Is Dead's "But You Are Vast" such a strong chance of lodging itself in one's brain for the day. Tack on an insanely catchy chorus anchored by the line "Can we get free?" and you might just excuse them for a touch of predictable songwriting repetition. "I Am Everything I Am Not" sports a sparse bridge toward the end that mixes distant vocals, a soft tremolo-ing guitar line, and thunderous, distorted drum hits to give the track a near-epic conclusion. Fans of The Troubled Stateside will also notice the slick re-working of "Dark Island City," as it has morphed from a short pop-punk number to a something more somber and drenched in reverb. And as a testament to the band's success in moving beyond their old sound, I'd argue that "Young," a ballad-esque track with a stellar, noisy midsection that's enjoyably unexpected, is the record's best offering. But then again, with a calm backbone and the cracking lyrical line of "If we can't get along we can't be in love," it's not entirely unlike the feel of Your Favorite Weapon's "Soco Amaretto Lime." Pangs of nostalgia, once again. Nevertheless, there are still some noticeable missteps that prevent the band from perfectly nailing its stride on all fronts. Worn out, hi-hat-heavy dance-punk beats are littered throughout the disc at random intervals, unfortunately stealing the wind from a lot of otherwise strong songs. They never seem to stick for long, but that doesn't make their presence any easier to digest. For as strong as "Republica" is, in both its intro and anthemic choruses, it also houses the records worst moment: a fit of the aforementioned drumming and fake vintage sounding, atonal guitar lines. There are a few sections of unexpected interludes and creative breaks in the album, but sadly, this is not one of them. Furthermore, the guitar-work on this record, while innovative at times, sounds pieced together, processed, and simply discontinuous over the course of the disc. To jump into a completely different genre for a second -- it's the exact same problem that made parts of Baroness' Blue Record hard to swallow. It's almost as if the band recorded the tracks in full and then went back through to add in extra layers of tinny-sounding guitars with little rhyme or reason. Are these deal-breakers? No; far from it. But they still irk me each and every time through and are the major reason that, as much as I enjoy many moments of this release, ...Is Dead still feels like the superior work of better execution and continuity from these guys to date. Bottom Line: There is little left in Crime in Stereo that actively represents the world of punk and hardcore anymore. If that's a problem for you, then their latest homage to Brand New, I Was Trying to Describe You to Someone, isn't going to be up your alley. For a record that has such an abundance of memorable moments, it still leaves room for improvement, especially in the area of transitions in instrumentation. Nevertheless, I'm still a fan.

Let me be the first to say how f*cking horrible this album is. To be honest, I couldn't even make it through the whole thing, so maybe I need to do that first, but I don't know how I possibly could when it's so shitty. What a ridiculous attempt at changing a sound when they have no clue what they're doing.

a very shitty version of Brand New this album is. Only gays are blown away by this bullshit

This is such a good cd, I dont know if I like it as much as ...is dead, but its still really f*cking good.

what a horrible cover

people are practically falling out of windows to see this band. woops.

im furious that this album only got a 7/10, by far the best album so far this year, and will most likely still be the best at years end, its AT LEAST an 8

one of the best bands out right now

i see nothing wrong with any of the drumming on this album, if anything, i think he is a good drummer. people talking about "brand new" in comparison to this is getting extremely old very fast. how many bands do we hear now a days that have a sound that isnt comparable or dont bare a striking resemblance to an already existing band? EVERYTHING has already been done, but some bands are better at working with that, like CIS. and anyways, whens the last time brand new put out a record this good?

nick has never done a review that doesn't consist of going through each song on the album, one at a time. You're not good at this nick. You shouldn't do it anymore.

Award for the absolute worst album cover EVER goes to this gay band.

nick has never done a review that doesn't consist of going through each song on the album, one at a time. You're not good at this nick. You shouldn't do it anymore. posted by syNYhc (suckit@c-cks.com) on 3/9/2010 3:57:10 PM_ god forbid a music review actually talks about the music on a cd, what an asinine thing to say. Yea the review was kinda choppy, but it was miles better than that TTEOTD review

singer is a complete ginger gay

isn't one of these dudes a fun offender?

the singer gave me head in the bathroom of peabodys

band was, is, and always will be trash. Please give me a saw to chop off my dck.

Crime In Stereo - The Contract