Dead To Fall Villainy and Virtue 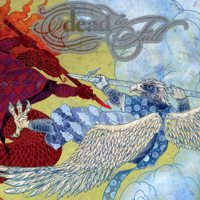 01. Torn Self 02. Bastard Set of Dreams MP3 03. Stand Your Ground 04. You've Already Died 05. Villainy and Virtue 06. Little Birds 07. Blood of the Moon 08. Cross Section 09. Master Exploder 10. Epilogue
2004 Victory Records
Our score 5
by Rob McFeters
12/1/2004
Music is such a personal venture which causes people to react and express themselves in intensely different ways. When it comes to music, I've realized that people can be easily pleased. It seems to this humble reviewer that Dead to Fall isn't overly concerned with challenging themselves or their audience. I bought Dead To Fall's debut for Victory Records and I enjoyed it for a short time, but it was an overall forgettable release. The whole album seemed to be a sort of Gothenburg-worship. Why settle for a cheap knock-off, when you can go straight to the source I'll take Slaughter of the Soul or Whoracle any day over an imitation which is littered with gratuitous breakdowns. As I sit here and listen to Dead To Fall's newest release, Villainy and Virtue, I realize not much has changed. I've listened to this record at least 20 times in the past three days, and every single time, I've forgotten almost everything about it. I've had to make myself sit right by my stereo to get anything out of this album. Dead to Fall seem to have eased up on their diet of Swedish metal, and increased their output of big, open, breakdowns, which you can hear coming from a mile away. This gets entirely too repetitive for me, and I'm sure this will seem like utter blasphemy to many readers. I suppose all of that repetitive mosh makes for a brutal live show. They also have brought in a more death-metal influence, which is a welcomed change, even if it is slight. Every song is played with talent, and ferocity, and I won't take away from the precision that Dead to Fall possesses. The one track I really do like is "Cross Section," which is more of a segue-way than a real song, but it is a trudging monster, and reminds me a bit of Old Man Gloom. Also, "Master Exploder" is a great song title, seriously, but musically, these guys don't do this title justice. No matter how I try to find more positive points about this record, it is still cookie-cutter metal/mosh. The production of "Villainy and Virtue," is adequate, and doesn't seem as processed as their previous album. Good job guys, because at least this record sounds like you can really perform instead of letting Pro-Tools do it for you. Bottom Line: This is paint-by-numbers metalcore, and there's no way around that. I'm sure legions of kids who take reviews too seriously will want my head, but that's the way it goes. I can't understand how any serious fan of metal could find this record exciting or challenging. This is completely average and predictable.

I agree that this album is forgettable. I listened to it several times through and I can't say that anything really stuck out to me (besides the breakdown in Bastard Set of Dreams). An accurate review.

good guys, yet the album is predictable

How do you have time to listen to a shit album 20 times, I don't even have that to devote to good albums!

Rob, you are my god. Review after review, you speak the truth. Keep up the good work.

It's not the most original album, but I don't think it deserves a 5. Maybe a 6 or 7. Bastard Set of Dreams is fun as is the totally Matt Matera part between that song and the next. Giving it a 5 makes it seem like it's a terrible album, when it's actually pretty decent. I bought a few months ago and I still listen to it, though I'll admit it hasn't been in the regular rotation for a while.

good album. awesome live show. come mosh so i can kick you in the teeth.

I love this record. I don't need every f*cking album to challenge me. This is some good time car moshing for me.

The very first time I heard the name "Dead to Fall" i knew what they were going to sound like so by saying that this album is predictable is an obvious statement. But so how, they take this textbook style of metal and make it their own. The next time i want to buy a background music disc, I might consider this album.

giving it a 5 does NOT mean it's a terrible album. 5 is exactly half of 10, which means i gave it an average score. if i thought it was terrible, i would have given it a 2 or 1. i just think it's a 5, because it's mediocre.

atleast the album art is good.

this cd should at least get a 7. yes, it falls into the ever growing which seems to be "swedish core" almost but you got to give them the credit to do it well. they do both styles of music very well. at times i ask my self "why not just do hardcore?" or "why not just do swedish thrash?". either way good band and good cd. plus it's tops their last cd...horrible in my opinion. only 2 good songs i can think of off that last one.

I would have given this a 6 I think. Yes, it is rather cookie-cutter, but I think there's some light at the end of this tunnel. I found many elements to be sweet if only they would have expanded on them. Like when I first heard "Bastard Set of Dreams" I was actually pumped to hear this. I thought their first album was terrible, but this song offered up a direction that I thought the band would take making them much better. Unfortunatley there are too many sections that remind me too much of

boring on CD, fun at shows.

I would also give it a 6. I really liked Everything I Touch Falls To Pieces, and I was kind of disappointed with this one. There is definitely more of a deathmetal influence on this one, which is fine. And there are some good riffs and breakdowns. But nothing I haven't heard before. And I am really annoyed with bands adding little instrumentals and such to give records a full 10 or so tracks so they can sell it as a full length. Call it what it is: an EP, and be done with it.

I was never really into this band and was surprised when victory signed them. then again that labelis readching anyway and this is the closest they can get to a tk style band

this is their victory debut, as stated several times in the review

The only records I ever see getting good reviews on here are straight up hardcore, obscure metal, and isis ripoffs, hence why this reviewer enjoyed "cross section" above everything else on this record. Its constantly becoming harder for me to take a lambgoat review seriously.

Dear reviewer, You couldn't be more correct. I am tired so I will just say that all this mosh metal bullshit is gone so far past redundant that it is somewhere inbetween the x's and z's in my dictionary. Thanks for putting this album in perspective for all these f*cking idiots who will dance for anything so long as a breakdown manages to sneak it's overused head into the lowgrade metal riffs. And for godsakes...ease up on how many breakdowns are thrown in each song. It's boring.

The inconsitancy of Lambgoat reviews boggles my mind. Alexisonfire gets an 8, but Hawthorne Heights gets a 2 (the bands sound very very similar) BTBAM and this (excellent) Dead to Fall cd get 5's, but something silly and boring (The Ducky Boys!?! wtf????) gets an 8? I think you guys get your cds sent in the wrong cases because obviously something is amiss. Thank you.

...aaand you may think people take reviews too seriously, but as a journlist myself I understand that what I write has a lot of sway with readers. You have to understand that what you lambgoat reviewers write here influences people's decisions to buy cds, go to shows, and support bands. It's a bigger responsibility than you realize.

"Everything I Touch Falls to Pieces" was a masterpiece. This one leaves a little to be desired. Still should have gotten more than a 5 though.....

this review sux ass, i bought this today and it rules, challenging or not its good shit

Agreed, I cant remember any riffs except track 2,3, and 4. The rest of the album doesnt come to mind.

everything i touch, even though a horrible horrrible recording and mix is a pretty decent album with pretty cool lyrics so i awaited for this album to come out. i saw it adn thought the artwork was amazing, i heard it and was ashamed becuz i thought they would do way better. come on guys, get your heads out of your asses.

Not the best band in the world, but they have to be one of the most entertaining. their music is so easy to like.. they just know how to write music. i personaly love the band. they kick ass and i think people that dont like em are either ignorant or just dont like the genre. They have improved so much.. the one thing that i did not like from the cd is that its so short.. if it was up to me i would have made a longer album with less musical intermissions. they f*cking know how to work the crowd!

Rick and hxcobd are dead on. I love Dead To Fall's "Everything I Touch....", but this one falls a little short. It's still a good album, just not as great or memorable as their first. Whoever said their last album was terrible is either seriously stupid, only looks for top notch recording, doesn't like the genre, or all three. Anyways, I support them all the way.

Its true that the songs are forgetable but i saw them live 2 times and they make a fun show.

the review guy doesnt know what the hell he's talking about! buy it and get your goddamn dance on!

Only thing that made this album enjoyable was the guitar work of Matt Matera. Other than that after he left, this band became old. Very old.

its pretty good, not their best though